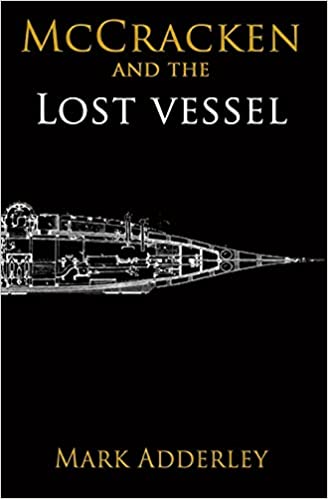 Young readers and pulp adventure fans will not be disappointed by this latest McCracken treasure hunt. By the end of it you’ll either want to build something or cook something or go back and reread Jules Verne. Either way, Adderley has a way of bringing out the inner child in any reader of any age. By far this adventure has been my favorite in the series.

McCracken begins his adventure shortly after the events of the Lost Oasis where one of his friends got engaged to remarry his ex-wife. Now that the couple are newly remarried, McCracken and his team are taking them in their dirigible to the (literally) underground town of Coober Pedy, Australia, where the two will begin their new life together. Along the way they pick up a shady journalist by the name of North and an art dealer by the name of Ned Land. Land says that he is the grandson of the Ned Land in Jules Verne’s 10,000 Leagues Under the Sea. Land claims that Verne’s books were real, and he’s discovered a clue that could lead them to the actual hidden island that Captain Nemo retreated to in his retirement. Never one to turn down an adventure, McCracken and his team aboard their ship, the LS3, agree to take him to the coordinates of this mysterious island. Underway to the island they are dogged by a Mr. Diels of the German Weimar Republic who says that he has reason to arrest Ned Land. However, even the McCracken’s own German friends admit that there is something fishy going on with Diels when he spouts some proto-Nazi views. The determined German operative chases them across Australia, and the families aboard the LS3 Dirigible lean on their intelligence and faith in God and each other to foil him time and again. Things come to an explosive battle on the mysterious island, and McCracken even gets the chance to fight back using some of Captain Nemo’s steampunk weaponry.

Although this is the eighth novel in the series, Adderley has done a remarkable job of writing his books in such a way that readers can pick up the series in almost any order. However, with the hints of the coming WWII and a few proto-Nazi’s making an appearance, this is the first novel for which I would advise readers to have read at least one other McCracken book before this. That said, I think this is my favorite in the series so far. Perhaps it is just my nostalgic literature-loving brain, but who can resist a treasure hunt for Capt. Nemo’s famed Nautilus? When it comes to action, intrigue and mystery Adderley has certainly outdone himself.

The weakest element of the book would have to be North, the shady journalist. Although it is to be expected that villains will be a little flat in what is meant to be a pulp-style adventure, it seemed that the message was that all journalists are untrustworthy by default. Of course, it is important to address that journalists can abuse their authority, but much like depicting all cops as evil, it was a missed opportunity to address for young children the distinctions between ethical journalism and manipulative journalism. Parents might want to provide some further guidance on this topic when bringing this book to their children, but the book also staunchly argues that everyone—even shady people like North—should be treated with respect.

There were also a few moments where the heroes argue that it is a moral imperative for people to own guns but also to learn how to operate them safely and responsibly. Some parents will be very happy with that message, but as some might want to offer further nuance to their children on the topic, I thought it prudent to mention. It should also be repeated that none of these topics color the entire events of the book and whatever your family’s values, this is a fun and morally edifying book for your children to read with some minor guidance.

One of the fun elements in the McCracken series is how Adderley’s enthusiasm for engineering and invention shines through. I don’t know anyone else who can make explaining the inner workings of a battery so interesting (except perhaps Jules Verne himself). When the heroes get to explore Captain Nemo’s ship and inventions the joy is infectious. Treasure hunts are always fun, but often times the prize at the end isn’t as interesting as the journey. I am happy to say that the fun does not let up from the beginning scenes where the heroes have to “play” with dynamite to the end when they’re locked in a cool steam punk battle with some proto-Nazis. Old fans of McCracken will enjoy seeing how the family aboard the LS3 is growing, with some of the younger children from earlier books entering into their teens and becoming more active in the adventures. While Indiana Jones might be forever single and solo, McCracken and his friends bring their wives and children where everyone works together to form an international and proactive team ready to take on evil. And with the hints of WWII brewing at the end of this book, I think they’ll soon have to.