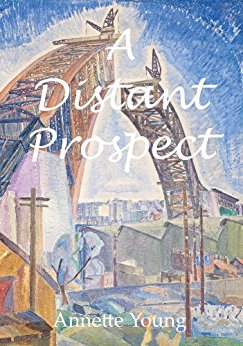 In her simplicity and quiet wisdom, Annette Young proves to the reader that it does not take a fantastical world, or superpowers to be a superhero, or even excessively refined martial arts and detective skills to save a life and make the world a better place. In Young’s A Distant Prospect, the simple acts of mercy and charity shown by family and friends restore peace and healing to the wounded and traumatized post-war community. Set after WWI and Ireland’s war for independence, Young tells a story of a community living in Australia through the eyes of Lucy, an Irish Catholic girl of 15 years.

The story begins with the solitary and cynical Lucy, suffering from paralysis of the legs due to a bad bout of polio. Because of her paralysis, she sees herself as unlovable and holds some natural doubts about God’s love for her amidst her suffering. To cope she isolates herself with books or plays the cello to escape the world. Young then takes Lucy on an inconvenient journey of friendship initiated by an array of characters. There is the persistent Della, a friendly, energetic and chatty, blonde, Mrs. Epstein, the music teacher and her unwavering determination to create a string quartet, Pim the viola player whose family and generosity provide blessings for healing and support, and Phoebe Raye, a mysterious girl whose story reopens old wounds and initiates the healing of the entire Community. Each of these characters opens Lucy to a deeper reality of what it means to be part of a community and what it means to love.

A Distant Prospect illustrates that it is in the day to day activities and challenges of life that make us Saints. Her protagonist Lucy rides the train, goes to school, visits a sick friend, has sleepovers in the country, goes to music lessons, fights against stage fright and shame, reads poetry, enjoys puzzles, and enjoys and excels at playing the cello. The most exciting ordinary aspect of Lucy arises from Young’s recognition that we humans are all uniquely nerdy. I was sold on her character the moment I read about the distracted Lucy who answers a question about a historical date by stating that it was a Fibonacci number.

Like many of us, Young shows Lucy’s reluctance in accepting the good things God desires for us. In the beginning, cold Lucy heroically gives Della’s consistent offers and requests of friendship a cold shoulder, but then when Della is absent from school, Lucy realizes her thankfulness for the attention and friendship Della had shown her. Lucy also dares to survive a whole week without her cello because of her fear and stubbornness at the thought of joining a quartet. But through the desire to have her cello back, the coaxing of her father, the presence of her friend Della, and finally, her consent that her elders know what is best, Lucy joins. While she does warm up to the idea of playing in a group, her anxieties resurface at the idea of performing publicly. Naturally reserved and private, her physical paralysis which already causes her great social embarrassment, distress, and shame, increases her fear.

Unfortunately, fear of making a public performance is only one of many struggles Lucy encounters as she becomes more involved in her community. The clash of personalities and the variety of backgrounds each girl holds, create a cacophony of conflict, (socially and musically). Pim can be outspoken and judgmental and can appear to be uncaring and selfish, especially as she is unscrupulous in taking so many desserts. Della is timid, and though naturally cheery, her deep care for others makes her prone to worry. She is often found exerting herself to keep the peace amongst Pim’s hurtful ignorance, Lucy’s cold objective assessments, and Phoebe’s moody behavior. Lucy, shy and private, is strong and confident when speaking her mind, has bouts of self-pity and shame in respect to her looks and awkward legs. Lost in self, it is first hard for Lucy to get along with Phoebe Ray, a socially odd, and openly emotional girl, whose spontaneous actions are initially incomprehensible, and whose past is complicated. It is only when Pim extends an invitation to the girls to spend the night at her family run guest house, do they open up and talk about the difficulties the war has brought upon them. After sharing a few their stories with another they begin to see and understand the reasons for each other’s unique characteristics. Eventually, over time (and many catastrophic rehearsals) the reader sees how each girl’s growing understanding creates strong bonds of trust and friendship. Lucy realizes the direct relation and significance of communication and harmony, amongst themselves is reflected in quality and harmony of their playing but the reader also sees how the harmonious friendships help Lucy to form a healthier relationship within herself. By her friend’s love, support, and appreciations, Lucy naturally develops a more positive self-image and overcomes her fears of performing, and finally shares her beautiful talents within the appreciative community.

While Young could have chosen to end with the successful harmonious quartet and the stronger friendlier happier Lucy, the story continues because Young is not afraid to delve into the mystery of living happily ever after. So, just as the honeymoon period in a newlywed’s life naturally fades, so darkens Lucy’s almost perfect world. The brokenness of the community’s past must be confronted when Phoebe’s troublesome behavior reaches a climax revealing her dangerous home situation and an inconvenient murder mystery. Pierced by the real and painful consequence of sin, Young forces Lucy to revisit and reconcile her doubts about God’s Love amid life’s unfortunate losses and pain. But as day to day life continues throughout drama and turmoil, Young’s quartet continues to play and learn new pieces. They even enter a competition and win.

The musical feat surmounted, Young spends her last few chapters relieving the reader of her foreboding foreshadowing and tying up some loose ends while setting the scene for a sequel. While the musical victory parallels the reestablished harmony within the entire community, Young moves the reader to see that the fact of victory and winning, is not Harmony itself. Rather, Young reminds the reader how Lucy’s cello playing has turned from an escape into an honest prayer. She reveals harmony to be the fruit of prayer and prayer to be a way of being fully present to the community and the fruit of prayer, mercy, and forgiveness. She also shows how being in right relationship with God allows His mercy to flow through you in your everyday actions, as it is through the merciful persistence of Della’s strong faith and friendship that transformed Lucy into the warmhearted math-loving compassionate humble puzzle solving introvert the reader knows her to be at the end.

I found it most refreshing to read a story where the Catholic life of the protagonist is so normal and taken for granted. And the best thing is, all these good things happen through ordinary events and actions, including prayer and friendship. I believe there is a great need for stories that focus on the simple day-to-day events in a character’s life, family, and community. And while the series of consequential connections between characters could be considered contrived as conscientious alliteration, Annette Young’s novel A Distant Prospect still gives the world a treasure. It is a story of Mercy such that in the end, the reader can confidently say to themselves, “God is merciful and in Him, I can be merciful too. I can make a positive difference in the world.” And perhaps after reading Young’s book St. Catherine of Sienna would have made this conclusion: “Be who God meant you to be and you will set the world on fire.”

Ultimately Young’s book is about healing and prayer. Lucy heals as she opens her heart, lets down her guard, and accepts the challenges she faces. Lucy transitions from being physically wounded from polio to being emotionally and spiritually healed through friendship. Her cynicism and doubt of God’s love melt into a charity for others and thanksgiving for His Sacraments and her healing is confirmed by Young as her cello playing gradually turns into, prayer a being fully present to God and her community. With a deep understanding the brokenness of the world, humanity, (and herself) Annette Young challenges us to believe and teaches us what is true, that we too can build and restore our broken community through the simplest acts of Mercy.

I highly recommend this credible book, especially for those who seek a portrayal of the daily Christian life as more authentic than LED sunshine and more real than silk and plastic roses. I praise God for the arsenal skills with which he has graced Annette Young.

Subscribe to Find Out When this Book is 50% to FREE

Audience: YA and Adult