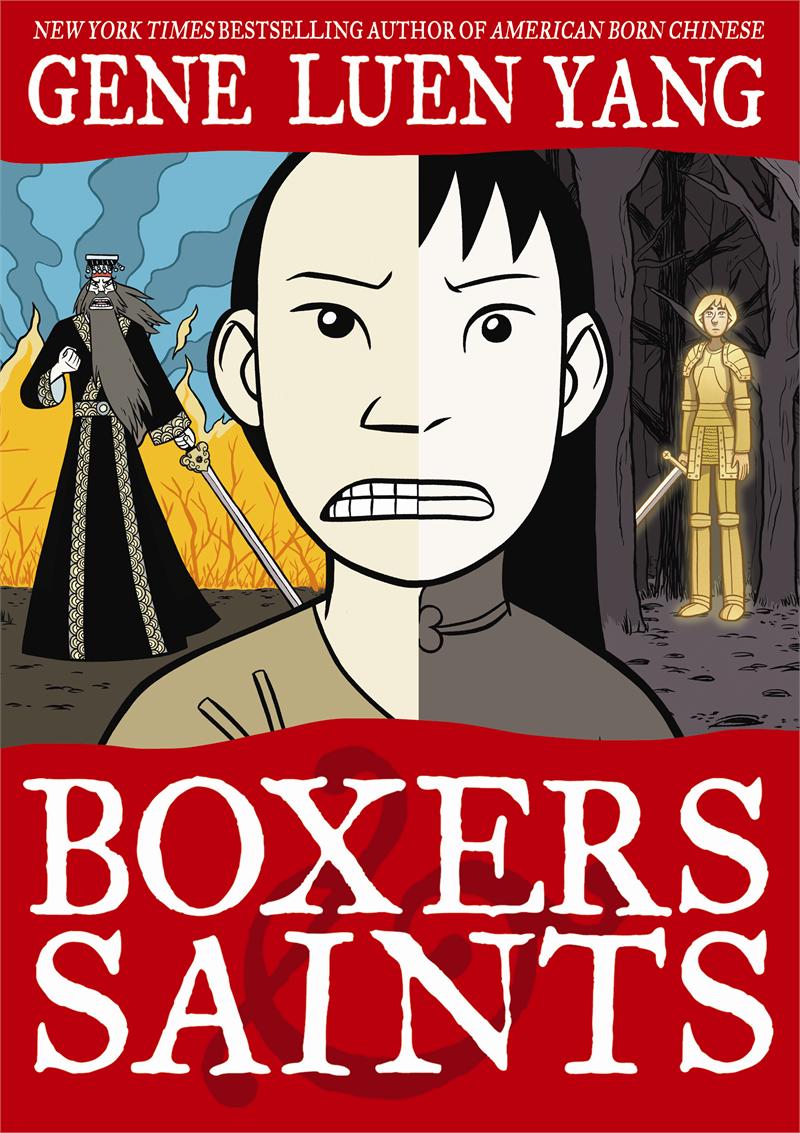 Boxers and Saints is a two-volume graphic novel set during the Boxer Rebellion in China. The first volume, Boxers, is told from the point of view of Little Bao, a young Chinese peasant grows up to become the leader of a band of Boxer Rebels hoping to take back their country from European Imperial rule. Little does he know that his efforts will fan the flame of one of the bloodiest wars in modern history. He also works to protect the beloved stories of his culture from destruction at the hands of foreign Christian missionaries and traitorous Chinese Christian converts. Along his journey, Little Bao is guided by visions of the spirit of Ch’in Shih-Huang, China’s first emperor (think Chinese George Washington only a tad more genocidal).

The second volume, Saints, is told from the point of view of a young girl. In Chinese culture, the number four is considered unlucky because it sounds like their word for “death.” As the fourth daughter born to a family long plagued by misfortune, her distraught grandfather refuses to give her a name, and her family takes to calling her Four-Girl. Four-Girl is also a young Chinese peasant who escapes the oppressive sexism in her culture by converting to Christianity. At her baptism, she is even given a real name: Vibiana. As the Boxer rebellion erupts around her she is plagued by visions of St. Joan of Arc, and reflects on the reality that this ancient Christian saint fought for the same cause as these Boxer rebels: the unity and freedom of her country. And yet these Boxers would willingly kill her foreign friends and herself. Guided by the soul of St. Joan, Four-Girl/Vibiana works to understand her role in the events around her.

Though many are quick to dismiss comics as high-level fiction, Yang has already proved himself an intelligent storyteller in his award-winning autobiography, American Born Chinese. This successive novel of his is no exception. In fact, I find it to be even more thought-provoking. Gene Luen Yang also writes comics for DC’s new Chinese Superman series, The Avatar: The Last Airbender comics, and at a ceremony at the USA’s Library of Congress, was named Ambassador for Young People’s Literature 2016-2017. This is one modern Catholic author to keep an eye on. I recommend this two-volume series to anyone with an interest in history, comics and diversity in fiction. Other Christians too will find these books edifying. One of the most memorable characters in the book was young Protestant missionary couple. Their bravery and resilience was very inspiring. This story beautifully reflects on the sometimes compassionate, sometimes abrasive ways that Christianity has encountered native religions and cultures.

How a humble, Irish immigrant brought Mary to Hollywood and then the World.
Read More

Champion of the Poor: Father Joe Walijewski by Voyage Comics

Meet the priest who spread the love of God in Peru.