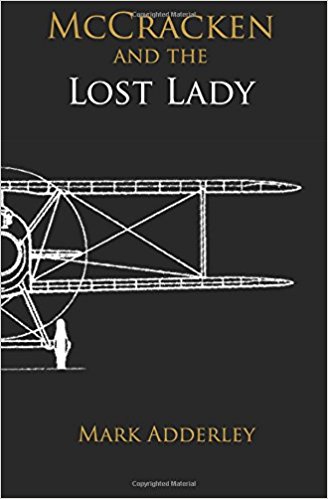 McCracken and the Lost Lady is a pulp fiction adventure novel written to entertain the author’s young children. I can firmly say that it fully lives up to the adventure and humor its genre entails.

After surviving a WWI dogfight, McCracken crash lands in the Italian countryside and is attempting to make the long walk home when he stumbles across a clandestine meeting between Lenin and a group of his supporters planning to smuggle the communist leader into Russia to start the revolution.

McCracken makes it home on foot and rallies his motley international team of adventurers to kidnap Lenin and stop the revolution. McCracken and his team fear that Lenin’s revolution will spread chaos across Russia and end the eastern front of the war, thus allowing the Germans to squash the Allied powers on the western front. To keep this from happening this they chase down Lenin’s train on their airship and lower McCracken onto the train. Once confronted with the evil villain, however, McCracken is quickly captured. Lenin then gives an almost obligatory evil-plan speech in which he claims that by finding and destroying the Icon of Our Lady of Kazan, the spiritual protectress of Russia, he will be able to successfully begin his remaking of the world. After escaping his clutches, McCracken and team then completely leave off their attempts to stop the revolution and instead make it their mission to find the Icon before Lenin’s cronies do. This is the fifth book in the McCracken series but is a stand-alone adventure that I had no trouble understanding.

I’ll be completely straight with you dear reader. This story is cheesy. This story is preachy. This story has more plot holes than Harry Potter and the Prisoner of Azkaban. But it is so much fun, that I Do Not Care. If you read this book to your kid, I don’t think they’ll notice at all. (No real diss of HP3 meant you Potterheads. That’s my favorite one in fact.) McCracken gives us the grounded swashbuckling Catholic hero that our inner child has always wanted.

Aside from the Lady of Kazan angle, the catholicity is not especially intellectual. McCracken and his wife are devout Catholics, even putting off plans to chase a villain in order to make it to Sunday Mass. One of the characters has a conversion moment and at the climax, there are some heart-pounding miraculous happenings I will not spoil. Suffice to say, McCracken obviously does not stop the communist revolution but he, and the reader is given a strong reminder of who is really in charge of things. This book isn’t out to convince anyone of anything, but just to give us a fun well written Catholic superhero.

Adderley also gives us something refreshing in a turn-of-the-century pulp adventure. McCracken is decidedly not your lone-wolf jaded anti-hero. He is a family man, bringing his wife and toddler son along with him on his adventures. I thoroughly enjoyed seeing a husband/wife team up where the wife played an active and useful part in solving some of the major problems the heroes face. Ariadne is a wonderfully written heroine and her calm practicality is a suitable match for McCracken’s enthusiastic bluster.

Their toddler son Archie though was a little problematic for me. I was fine when he stayed on the ship as the comic relief. I liked how McCracken’s whole team pitched in to babysit and watch the boy while still managing to have thrilling adventures. But at one of the climactic battles, McCracken and his wife actually bring their son along. I understand why he was there for symbolic purposes, but that was one plot hole that did annoy me.

Another issue was a scene where McCracken overhears his son saying that he is going to put the cat in the oven, does nothing about it, and then chides his wife for doing nothing about it when she gets upset. (The cat does not get harmed btw.) Ariadne gives her husband an appropriately scornful look, but I would have liked McCracken to show some self-awareness of his own neglect at that moment. Other than those two moments, the only other thing that bothered me was that the arguments made against Communism in the book were a tad weak and leaned more towards modern American conservative political jargon than strictly logical arguments, but I do not think any of these things will take away from the overall enjoyment of the book for any pulp adventure fan or their kids.

More to the point, I do not think I would want a more serious criticism of Communism. McCracken, like Indiana Jones, is too much fun for me to be bothered with something so heavy especially when there are airships to pilot.

This book effuses excitement for life; for everything from taking down the baddies to even excitement over all the gadgets, cars, and ships that pop up in the book.  The narrative voice gets more than a little enthusiastic about some engineering details and I think any young boy would appreciate it for that.