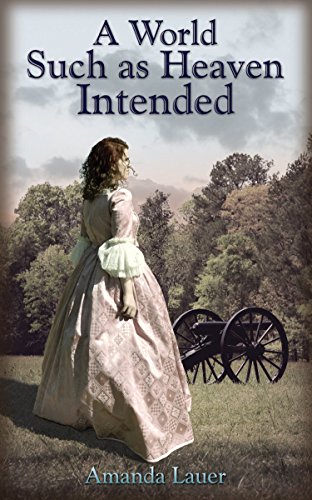 A World Such as Heaven Intended is a historical romance. In Lauer’s story, Fiery redhead Amara McKirnan works with her uncle in a makeshift hospital in Atlanta, one of the few places the war hasn’t touched so far. Nathan Simmons, a Confederate soldier from Texas, is one of her patients, and they don’t get off to a good start. In spite of their misgivings, an attraction forms between them.

Amara is a southern Cinderella, with an ailing father, a snobby stepmother, and a spoiled stepsister. In contrast, Nathan moved from St. Louis to Texas in hopes of living on a ranch with his brother. Unfortunately, when the Civil War makes its way to Texas, Nathan and his brother, who side with the Union, are instead forced to fight with the Confederates. Once Nathan recovers from his war injuries, he plans to defect to the Union at the first opportunity.

Amara and her family side with the Confederate Army, which makes things complicated when General Sherman comes marching in with a parade of Union soldiers, and Nathan is marching with them, wearing the blue uniform. The hospital janitor plots to lynch Nathan on the assumption that Nathan was a Union spy. Amara sneaks Nathan out of the hospital in the hopes of helping the Union sergeant flee to safety. Unfortunately, the escape plan goes awry. Amanda’s friend, James, dies trying to protect them and the couple ends up taking the blame for his death. With the help of a priest, Nathan and Amara elope and make their way to Nathan’s Texas ranch to bunker down until the war ends.

Even though Nathan and Amara are apart for most of the novel, the romance they develop is believable, especially during the time that they spend traveling to Texas. Their bickering gives way to honest conversation. They learn to fend for themselves on the road and face a life-endangering scenario together before they arrive at Nathan’s ranch. After settling in, Nathan and Amara finally find their happily ever after.

I recommend this novel to fans of historical romance, especially to teenagers who appreciate “Romeo and Juliet” relationships. The Catholicism in this novel is more circumstantial. It is part of Amara’s and Nathan’s characters, but the book doesn’t beat you over the head with religious ideas, so it’s one I think even a secular can read. Fans of Civil War history will like this as well, as the author does a great job at describing what Atlanta and Texas were like in the 1860s.