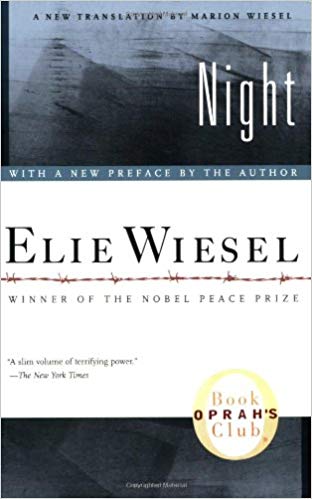 Untold numbers of books have been written about the Holocaust. Few are this raw, drawing the reader into the horror of the German death camps. This is Wiesel’s personal account of his family’s experience: how, at first, the Jews in German-controlled areas were oblivious to the atrocities that were taking place; how they were later forced into a ghetto and then ‘evacuated’ to Auschwitz; how they continued to suffer horrors we cannot comprehend. For Wiesel and his family, the horror began at Birkenau, the processing center for Auschwitz. I will not describe the scene at Birkenau, Auschwitz’s reception area, save to say that if you conjure a picture of the worst torments in Hell, you are close to what the fifteen-year-old Elie saw. It was there that he was separated from his mother and sister, never to see them again.

From there, it was
starvation, repeated selections until finally Elie was liberated, the last of
his family to survive the camps.

There is so much that could be said about this short book
and nothing could possibly do it justice. Still, I would like to call attention
to a few things that struck me.

Wiesel’s family was shipped to Auschwitz astonishingly late
in the war. The Jews of Sighet, a small town in Transylvania were not even moved
to the ghetto until 1944, when it was clear that Germany was losing. The
Germans hated the Jews so much that they were dedicating resources to
exterminate them even as the Soviets were closing from the east the Americans
from the West. Perhaps more than any tale of the conditions in the camps, this obsession
shows the depths of Nazi depravity. It wasn’t about winning anymore, it was
just about killing as many Jews as possible.

Perhaps this late start to the troubles of the Wiesel family
is why they and others did not heed the signs and flee when they could have. They
got comfortable, discounting the occasional story that made it to the village. Even
the ghetto was unguarded at first. They could have simply walked out and never
returned. But they remained.

Besides the sheer evil of the Nazis, the most haunting aspect of the book is the description of how the camps changed the men interned there. They lost their humanity. It wasn’t just that they were humiliated and forced into slavery. No, they were reduced to the state of beasts, willing to kill for a scrap of bread and turning against each other. There are scenes of sons leaving their fathers to die in the cold, and worse. Even Elie, who retains more humanity than most struggles with the fact that part of him is happy when
his father dies.

History is full of brutality, of men treating other men as
beasts, of abominations that thankfully few ever see and few can even imagine. Never
before in the history of humanity had brutality been implemented with such
terrifying efficiency, such coldness. Night shows us the evil that
humanity is capable of. It also shows us something else – our need for a
savior, for a God to forgive us. It shows us we need that love, that salvation,
for if we can commit such atrocities, one thing is clear – we are not God, and
we cannot save ourselves.