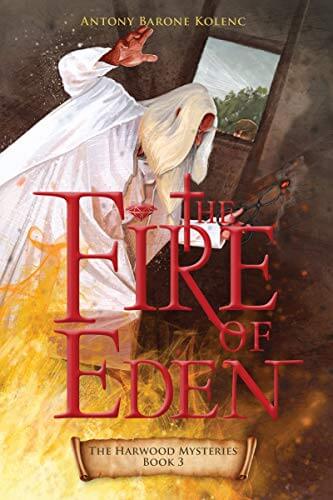 Xan has settled into his new life at the monastery and is trying to be a good person and leader to the other boys but troublemaker John seems set on undermining him every chance he gets. Then Xan receives a message from his Uncle, offering him an apprenticeship and future as a merchant in the city. The prospect of joining his only living family is enticing but, what if God is calling him to take vows? Then again, there is also that moment he had with Lucy when he ran into her in Lincoln. When his beloved mentor Brother Andrew asks him to come to Grenton Priory for his ordination, Xan is able to convince his Uncle to wait for his answer, but he only has until they return. While in Grenton, a priceless treasure goes missing and Xan is on the case to hunt for it. He even lets John tag along and pretends like he’s helping. But the investigation soon reveals that crime can exist even in a holy monastery and vows do not necessarily protect one from the world. This is a fun historical mystery that explores the discernment of religious life in a very relatable manner.

Aside from vocations, disability, pride, and humility are also major themes. Two of Xan’s companions in this book are physically disabled and they view their disabilities in wildly different ways. One of them was born disabled and while he wishes he could climb trees like his brother, he generally views life and his worth positively. The other is newly disabled from an accident and struggling with feelings of worthlessness. Xan and his other friends are also challenged to think critically about how they include or exclude these two boys and though Xan discounts them at first he gradually learns that making small accommodations to include the other boys is not just the morally right thing to do but that his two friends have more than a few hidden talents that Xan comes to rely on for help by the end of the story as well. I’m summarizing and simplifying here for the sake of brevity but, there is a lot in this story to make any reader, child or adult, think critically about their own tendencies to pride and small ways they might be discounting those around them, disabled or otherwise. This book challenged me and I look forward to discussing it with my son when he is old enough to read it.

Though this is the third in the series, this book can be read and understood apart from the previous two. Aside from the fact that this book takes place pre-Protestant reformation, there is nothing in this that would greatly offend a Protestant or Secular reader and thus could make for a good book through which to foster ecumenical discussion. The characters are all trying to be good people, a struggle with which nearly anyone will relate. Though I as an adult have found this series quite entertaining, these books are especially appropriate for ages seven through 14 and for introducing young readers to the Historical Fiction genre. There is a map of the area, a glossary of historical terms at the back and an explanation of the time period and some leading questions about the themes of the book that will give young readers the context they need to learn about both the Middle Ages and this type of literature. For this reason, teachers especially will not regret including this in either their required or suggested reading lists. Catholic families as well will love adding this book to the shelf. The chapters are about five pages long on average, which makes for good bite-sized reading before bed.

Shadow in the Dark was one of our Best of 2020 books and these sequels have only been increasing in talented writing and entertainment. I hope Kolenc keeps writing because this series might be the Catholic family’s next Hardy Boys or Nancy Drew.