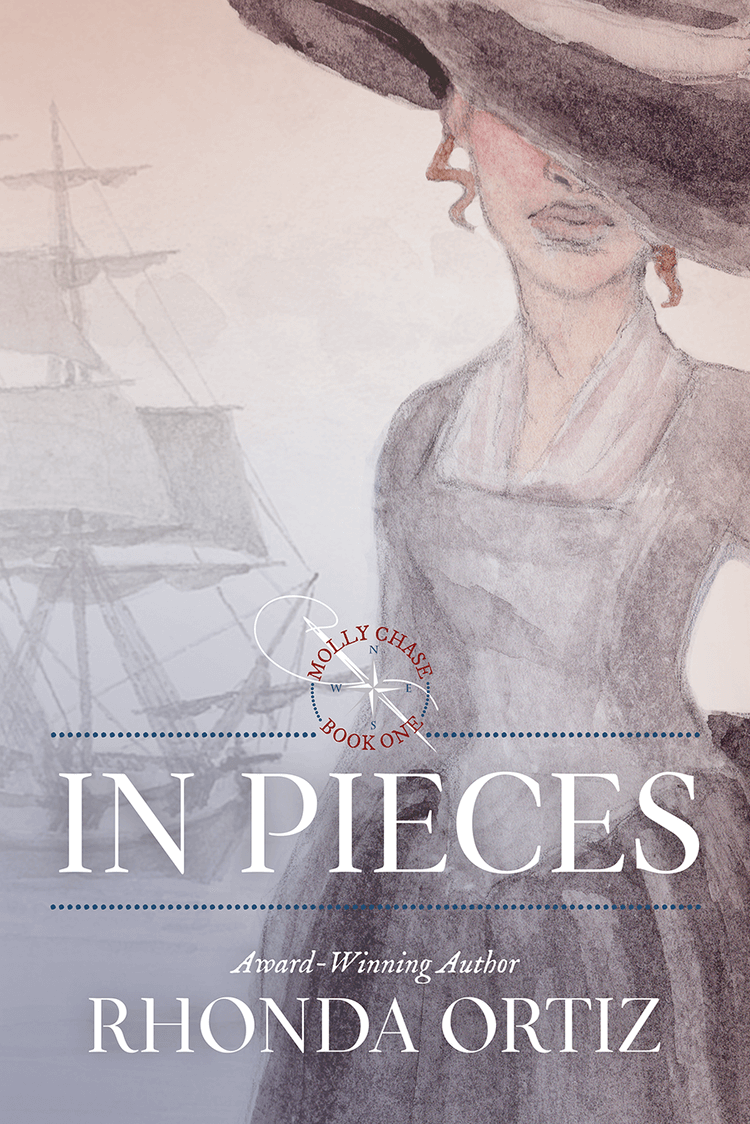 Life isn’t easy in post-Revolutionary Boston for a single woman. Orphaned after the death of her father, Molly Chase struggles to find her way while overcome with grief. She is blessed when the Robbs, family friends and former servants, open their own home to her, but it sets into motion a series of misunderstandings. Everyone notices how handsome and eligible Josiah Robb is—everyone except Molly, until she’s forced to face rumors of impropriety.

How can a girl in this age quell the rumors and remain friends with her best friend, who is, of course, in love with her?

The plot sounds simple in summary, but the book is a rich presentation of an engaging cast, each with their own struggles and themes. It’s set mostly in the lively port town of Boston with a cast of characters who hope that brewing European conflict doesn’t ruin their new lives and country. In Pieces shows both ‘slice of life’ interactions and larger political intrigue.

Molly has to struggle with the grief of losing her parents; the rumors about her virtue; and the decision of whether to earn her own living or to go hunting for a husband. Her best friend and main love interest has his own journey, in addition to whether or not he’ll get the girl: should he continue with his current career or become involved in politics, with a cameo of no less than first president George Washington? Should he remain in his current church, or risk breaking his mother’s heart to follow a path towards the Catholic Church? How can he best atone for previously trading in slave-produced sugar? Several other characters round out the book and help the reader dive deeper into the time period as well as universal questions such as retaining virtue in the face of gossip, the nature of men and women, and what makes a good marriage.

I highly recommend this book for fans of romance and historical fiction, particularly Christian readers. The treatment of the different Christian denominations was appropriate to this era of American history, with its tiny Catholic population. Catholics—especially converts—will have a special appreciation for Josiah Robb’s struggle with wanting to reject Rome but feeling drawn anyway. I have heard from converts with a similar struggle! Secular readers are likely to enjoy the overall plot, but there is an emphasis on listening to God and searching for religious truth that may not appeal to them.

I can be a little cynical about the romance genre, and still I only thought the action dragged a little near the end. My biggest complaint is simply that this is the first of the series, so while the plot ends satisfactorily, there are still some larger threads of the plot that only a sequel will address. Expect some minor frustration until we get another volume!

If you don’t like period pieces or romance, avoid this book, but Ortiz’ In Pieces has broad appeal for readers who enjoy drama, adventure, and a happy ending. I eagerly await the sequel.

What if you were Jesus’ protective older brother? Could you navigate the courts of Rome & Jerusalem to save him?

I Hope You Find Joy By Eliza Mae Albano

Can Emma find joy with the man who hurt her?