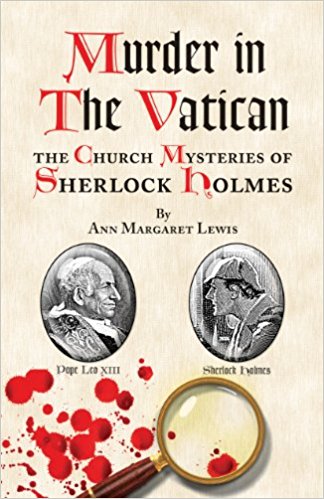 In the original collection of Sherlock’s mysteries, Sir Arthur Conan Dole made passing references to two cases involving the Catholic Church, and one involving Coptic Bishops. Much like his coy references to secret jobs done for the crown, however, Doyle never developed these little hints into full stories. Ann Lewis’s short novella finally gives us an insight into Holmes’ foray into the world of the Vatican. However, this book does come with a warning label. Any potential reader must begin this book while locked in a private sound-proof room the better to protect the general public from being gravely injured by fan squeals. Also, wearing earplugs is advised.

Sherlock Holmes spin-off stories are a dime-a-dozen these days but rarely does an author pull off imitating Doyle’s unique tone and language. And yet, Lewis succeeds admirably. I will go so far as to say that style-wise, this is the best imitation of Doyle’s voice that I’ve read so far.

While Lewis weaves in a subtle Catholic undercurrent throughout the stories, she never goes so far as to alter the beloved characters from their decidedly English-Anglican roots and modern secular worldviews. At the same time, Lewis does address a few different ways that people of that time displayed prejudice against Catholics. The aging Pope Leo XIII makes an appearance and does have his badass moments, but don’t expect any major conversions to take place. In a way though, that is a major strength of this book. It is so rare we are given true examples of inter-religious friendships in which both parties come to love and respect each other without compromising their own values.

The first story, The Death of Cardinal Tosca begins when Pope Leo XIII hires Sherlock to solve the sudden and unexplainable death of his cardinal. This is Dr. Watson’s first encounter with the pope and the Vatican world and he is surprised to find that it is not the stuffy ornamental world he expected. In this story, Cardinal Tosca is found dead at his desk, apparently of a heart attack. Sherlock solves this case by uncovering a surprising and unlikely choice of murder weaponry.

The second mystery, The Vatican Cameos, is told not from Watson’s narration but from Pope Leo XIII’s pen himself. Ostensibly, this was one of the cases that Sherlock worked independently from Watson, so the good doctor writes to the Pope asking for his account of the case. Pope Leo XIII”s prayerful desire for the reunion of the Church of England with the Universal church is palpable in his account of the mystery. The Pope also makes references to Rerum Novarum, his encyclical on the rights of the workingman that made him so famous.

The third mystery, The Second Coptic Patriarch, involves a delightful appearance of Fr. Brown, who has only recently taken his vows to the priesthood. This mystery was delightful and perfectly cozy. My only complaint is that Fr. Brown didn’t get quite enough dialogue. I suppose that just means that Lewis will have reason to grace us with a sequel. One of these days I’d like to see a true Brown/Sherlock team up.

The mysteries themselves were passably clever, but don’t expect any grand twists. I solved the first two mysteries easily, but none of that ruined the experience of seeing Watson and Holmes tread the halls of the Vatican, interacting with such charismatic Catholic heroes as Fr. Brown and Pope Leo XIII.

This book is great for anyone of any worldview who is a fan of Sherlock Holmes and the cozy mystery genre. I honestly cannot see any fan of those genres disliking this book, unless they want some flat stereotypical evil priests or scary haunted cloisters. It makes for a great read for Catholics, non-Catholics, and Secularists alike.

Buys the Book Here: Unfortunately, the Author is experiencing some copyright issues at the moment and is not receiving payment for her work. Please be patient and when she is given justice please support her by buying the book.