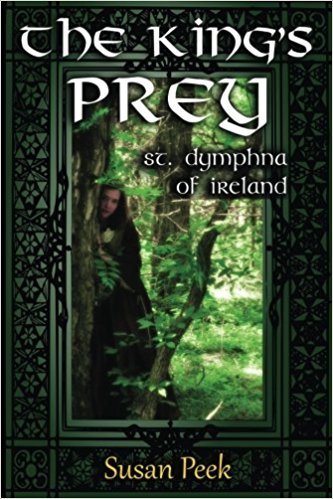 St. Dymphna is known as the patron saint for those struggling with mental illnesses, such as depression or various forms of insanity. What makes this novel unique is that it shows the trials and tribulations of people who suffer from mental disorders such as delusions, anxiety, and post-traumatic stress disorder. Dymphna, however, resonates with the loved ones of those who suffer from mental disorders, as she finds the strength to endure her father’s irrational behavior.

Dymphna, the princess of Oriel, is constantly hiding from her father, who has become deranged after the death of her mother, Odilla. When he decides to marry his daughter, Dymphna runs away from home with Brioc, the former minstrel, and his pregnant wife, Ethlynn. Brioc comes to Dymphna’s aid because her mother loved his music and he feels compelled to help Odilla’s daughter. With help from a kindly priest, the three of them flee the country, but the soldiers who work for Dymphna’s father aren’t far behind.

This novel is told in a third-person limited viewpoint and swaps between characters each chapter. It can be initially confusing for readers who are used to a first person or only one point of view character. This technique gives the reader insight to Brioch’s PTSD as well as Ethlynn’s insecurities in regards to her pregnancy and marriage. Even though Dymphna has no mental issues, she is still anxious about her father. She may not have any obvious flaws, but she displays great courage and integrity. She had the integrity to refuse her father’s delusional offer to marry her and was courageous enough to flee from Ireland even though she had no idea where she would go or what she would do once she escaped.

Brioc’s story is especially compelling given that his PTSD has driven him to become such a private, quiet person. There are times in the book that he considers suicide and it’s done in a realistic way, without falling into the trap of having suicide be a revenge fantasy or a teenage emo moment. However, if there are any readers out there who legitimately feel uncomfortable reading about characters contemplating suicide, please proceed with caution or avoid this book altogether. The good news is that he never follows through on his thoughts of suicide.

One nitpick that I had with the book is how the author portrayed Ethlynn’s paranoia regarding Brioc supposedly being in love with Dymphna. Ethlynn whines about how Dymphna is beautiful and perfect. To me, the laments come off as inconsiderate given that Dymphna is on the run from the king. Some of Ethlynn’s insecurities can be contributed to poor communication on Brioc’s part, but I wish that Ethlynn actually talked to Dymphna or someone about her fears. Instead, when Brioc tells her that he’s always loved her and that Dymphna never showed any interest in him, all her worries are instantly gone.

The issue of mental health is one that needs to be discussed more openly. I think this book is a good start for those who want to understand delusions and PTSD from a personal level. I also feel like it resonates with people who could be related to those who struggle with mental illnesses. The characters of Brioc and Ethlynn show how people need to be open to those they love about what they struggle with. Dymphna represents people who deal with abuse of any kind and how hard it is to get out of that kind of situation. Mental illness and abuse aren’t easy topics to discuss, but this book is a great starting point for both.