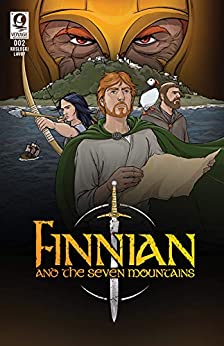 In ninth century, Ireland and Britain, the most valuable possession is a map.

The second volume of Finnian and the Seven Mountains begins with a dream ¾a nightmare really. In the dream, Finnian sees his deceased parents and his village burning. The Vikings have come ashore, demanding an item the villagers don’t have. The price for the honesty of the villagers is death. Finnian awakens in a cold sweat determined to stop the Vikings from killing anyone else.

Both coasts of Ireland and Britain are under constant threat of attacks from the Vikings. Finnian knows firsthand the damage caused by these vicious warriors. Finnian and his companion, Brendan are on a quest to find a mythical sword capable of defeating the Vikings and stopping the bloodshed. One problem: the Vikings want the sword too. Luckily, Finnian and Brendan have the map to the sword. The map leads the two men to the southern coast of Cornwall and the top of the deserted island of Karrek. Brendan tells Finnian that sailors try to avoid Karrek, but there are two ships beached there. Sadly, it looks like evidence of another raid with no survivors, until the men meet Merewyn. She too has tasted sorrow at the hands of the Vikings. Relieved that Finnian and Brendan are good men, she asks to join them in their search. Initially, they are reluctant, but she proves how valuable her skills are with a bow and arrow. Will the three reach the top of Karrek safely and find the mythical sword?

At the end of Finnian and the Seven Mountains, (vol. 2), the authors share the sources of inspiration for this particular volume. The first is the island of Karrek, more commonly known as St. Michael’s Mount, off the coast of Cornwall. Legend has it, there’s a rock formation on the island, called St Michael’s chair, where the archangel sits and watches over England. The second influence is The Lord of the Rings trilogy. Maps play an important role in Middle-Earth, similar to the map in Finnian and the Seven Mountains. Character Merewyn may remind Middle-Earth fans of Eowyn, the Shield-Maiden of Rohan. And although this wasn’t mentioned by the writers, readers who are fans of the Vikings series will recognize the semi-mythical King Ragnar.

Catholic and Protestant readers alike will appreciate the Christian values in this story. Finnian and Brendan are scared to go up the mountain in Karrek, but they put their trust in God. The map leads the men to the mountain, and they have faith that God will protect them and their search. Secular fans of the TV series Vikings as well as The Lord of the Rings trilogy will enjoy seeing the similarities in this comic.

This comic was a delight to read. The inspirations felt organic. In fact, telling the readers what the history was made me, as a reader, want to learn more. Being of a traditional comic size, twenty-five pages, there is not much room for character development. My hope is that the authors will give the readers more information about these interesting characters as the series continues.