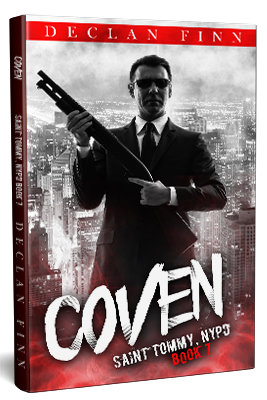 Over the course of the last six books, Detective Thomas Nolan, NYPD has taken down demon-possessed serial killers, death cults, vampires, succubae, and jihadists. He has saved the world multiple times, most recently from threats literally out of Revelation. To help him, the detective has always had access to his many charisms.  He’s been graced with the ability to levitate, heal, bi-locate, smell evil and more. But what if he couldn’t access his gifts? What if, for whatever reason, Saint Tommy was no longer able to use his saintly abilities?

That’s the situation in which the titular hero finds himself in Coven, the seventh book in the St. Tommy series by Declan Finn. Things get moving quickly as Tommy finds himself taking automatic fire during a murder investigation and fighting the unusually strong and resilient gunman, who actually killed the man he was looking for. The next day, Tommy is shot at on his way home from Mass. He doesn’t get to dwell on this for long, though, because an agent from Child Protective Services arrives to interview his kids. The agent is concerned at the Nolans’ adoption of Lena, a teenage girl Tommy rescued from a sex trafficking ring during his time in Europe. Again, there is little time to process the visit, as Nolan and his partner Alex Packard are called to investigate a body found in the woods. When the body turns out to be associated with Tommy’s friend D, a businessman operating on the edge of the law, the main story kicks into gear. Over the course of the investigation, Nolan and Packard uncover a military unit staffed almost entirely with modern pagans, the leaders of whom are involved in a plot to assassinate the Pope.

To stop the plot, Tommy has to fight his way through witches, werewolves, gangs, vampires, and a CPS agent bent on taking away his children. All without his charisms that have been so helpful in the past. Fortunately for him, he still has his mystical golem armor (acquired while fighting a demon in Europe) and his Soul Ring, an ancient artifact that derives its power either from virtue or vice. He also has his many friends to call on for aid, including of course D, Detective Packard, his new acquaintance Brian Levine (a private military contractor), and Father Freeman and Father Pearson, as well as a couple of virtuous pagans that aren’t happy with everything going on at the base.

In the end, Nolan is able to stop the assassination plot, but the primary instigator, the head of the Jesuit order, remains free, with access to the fortune of George Matchett, the enemy behind most of the events of the last six books.

If you are new to the works of Declan Finn, I highly recommend that you go back to the beginning and read all six of the previous books. I promise, it’s well worth the effort. If you have been following the adventures of St. Tommy for a while, you’ll come away eager for the next one. As always, I recommend this for older teens, given the violence and the heavy themes touched upon throughout the book.

If you want a gorgeous read delving into the world of angels that reflects actual accepted beliefs about them then this is the book for you.

Finally, someone’s done it. Someone’s written a horror novel about a haunted IKEA. And boy is it done well.

Investigations into a haunted suburban community mixes the fun of Stranger Things with the other-worldly sense of Tales from the Loop and the madness of House of Leaves.