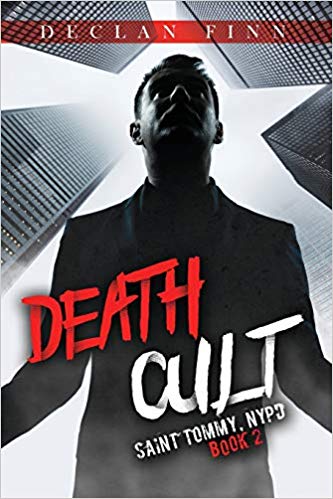 In author Declan Finn’s previous book, Hellspawn, Detective Tommy Nolan went up against the demons collectively known as Legion. They had possessed abortionist Charles Curran and went on a personal mission to take down the saintly detective. Given that Death Cult is the second book in the Saint Tommy series, things clearly didn’t work out well for Legion.

Audience:  Late teen and up.

That doesn’t mean that things are going to be easy for Detective Nolan going forward. Several months after using his various saintly abilities (especially bi-location) to end a prison riot started by Curran, The cult that raised the demon is out for revenge, and Tommy will need all of his gifts and some new allies to survive.

Death Cult begins with an attack in his home, targeting not only himself and his wife Mariel but their son as well. The Nolans though are no fools, and after they had a car thrown through the front of their home in the last book, they made plans to deal with nearly any situation that might arise.

The story picks up speed when the attackers’ cultish tattoos suggest a connection to Curran, which leads Nolan and Packard back to the offices of the Women’s Health Corp, a clear analog to Planned Parenthood. Meeting with the expected resistance from WHC President LaObliger, Nolan and his partner Alex Packard embark on a tour of New York’s abortion mills.

There are two scenes worth mentioning in this portion of the book. The first is a mill that has so many horrible things going on that it feels almost like a caricature. A teenager is being forced onto the abortion table while a “doctor” is about to kill a premature infant. The floors are full of cat feces and bloodstains. It’s so much it seems unreal, until you realize that this is all based on the Gosnell case and is therefore entirely plausible.

In the other scene Nolan survives a poisoning attempt at the next mill (another perk of his being a Wonder Worker). Fortunately, questioning the would-be poisoner gives the two detectives the clues they need to follow the trail into LaObliger’s neighborhood. Nolan, Packard, and Assistant District Attorney Carlton are at a loss of how to approach her, a problem that is solved when Nolan’s son is kidnapped, and a note implies that Nolan already knows where to go. Given that LaObliger has political backing, they have to go alone. Or nearly alone. Thanks to his community-centered style of policing, Nolan has a good relationship with some of the less reprehensible criminal element, who show up and play a pivotal role in the final battle.

During the whirlwind plot, new supernatural elements are also introduced, most notably numerous encounters with zombies. No, not Walking Dead style, these look perfectly normal, except for the stitches left by recent autopsies.  What makes this possible is a new character, a Voodoo Bokor known only as Baracus who seems able to reanimate the dead, possesses superhuman strength, is able to survive fire, and disappears into the shadows.

That last ability has me curious, as it is shared by Dalf, an unscrupulous character from Finn’s Love at First Bite series. I can’t help but wonder if he will turn out to be the warlock who is really running the death cult.

That speculation aside, with Death Cult Finn has once again delivered an entertaining story that expands his lore, touches on deeper themes, and makes inventive use of various elements of the Catholic faith, especially in the way Saint Tommy combines bi-location and levitation in one scene. Abortion being so central to the story also makes it particularly relevant to the reignited abortion debate in the United States.

If you’re looking for a fun, action-packed story that doesn’t pull any punches about what it takes to be a saint in a world where abortion is considered a moral good, then I strongly recommend Death Cult.