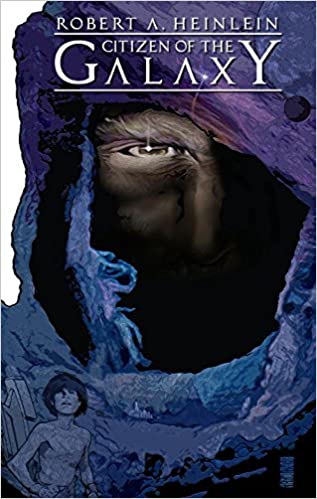 The classic science fiction writers like Heinlein, Dick, Herbert, Asimov, and Bradbury were about so much more than setting up cool alien worlds, ray guns, and laser swords. They asked deep questions and used their writing to explore them and provoke others to contemplate some of the deepest mysteries in life. Herbert explored the nature of religion, Dick asked questions about what it is that makes us human, and Heinlein used his works to explore that nature of freedom and how it works in different contexts. Citizen of the Galaxy is arguably Heinlein’s best work on the subject.

The story takes place in the distant future, with humanity having expanded out into the galaxy. Most of the settled worlds are still under Earth’s authority, but a handful have broken off and it is there that we meet Thorby, a pre-teen boy up for sale at a slave market. He’s bought by a beggar named Baslim the Cripple and from there embarks on a life that exposes him to many different societies and states in life.

It is here that Heinlein shines the brightest. He artfully uses every stage of Thorby’s journey to explore the structure of the society that he is in and how that affects the concept of freedom. The story begins with Thorby wishing that he was back on his slave ship. At least there he had friends and status in the holds. Now, waiting to be sold, he knows he will have to start over.

Baslim, fortunately, is a kind master and teaches Thorby the art of begging while also educating him in literature, history, and mathematics. Without even knowing it, Thorby is beginning to experience his first taste of real freedom, the freedom to think beyond his immediate circumstances.

Thorby later is taken by free traders and then the military, allowing the young man to experience life within different but highly structured societies, learning that in order to have the freedom to move around the inhabited star systems with a large number of people requires a great many rules to maintain order.

In the end, he is running a large interplanetary business, in theory with the money and authority to do whatever he wants. Yet, Heinlein makes it clear that to live well in such circumstances, one is bound by an interlocking web of obligations, each one pulling him in a slightly different direction and demanding his time and energy.

Throughout Thorby’s story, Heinlein does an excellent job of exploring the nature of freedom and demonstrating that in any society, there are always rules and duties that prevent freedom from being absolute. There is even the implication that freedom without some sort of structure is completely meaningless, a concept that conforms well with the Catholic understanding of freedom.

Lest you think Citizen of the Galaxy is merely a philosophical treatise thinly disguised as a science fiction story, the author does a fantastic job of making each society believable as well as drawing characters with genuine goals and emotions. With Thorby especially, Heinlein convincingly shows the confusion and frustration he experiences as he moves from one society to the next.

Some of Heinlien’s works do contain themes and ideas that are contrary to Catholic teaching. I saw none of that here. The only society portrayed in the book that has standards that very clearly contradict Catholic teaching is the Sargony, which is portrayed in a very negative light given its practice of slavery.

I definitely recommend it for more mature teen readers and up, not because of any adult content but because the story is fairly slow moving and the concepts that make it worth reading will go over the heads of younger readers. I’ve never been disappointed when I go back to the well of the great sci-fi writers and Citizen of the Galaxy is no exception.

Leaf by Niggle isn’t nearly as well-known as LOTR and The Hobbit, but it is as beautiful and moving in its own way.