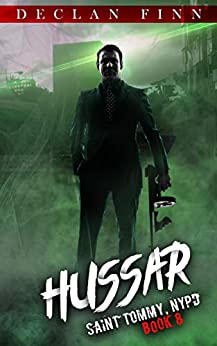 Detective Tommy Nolan NYPD is no longer a detective. In fact, three years after the events of Coven, Nolan has actually been promoted to Lieutenant. That means that life has been much less exciting for a while. Rather than walking the streets and getting shot at by everything from street gangs to reanimated zombies, Nolan now spends more time at his desk, keeping the department together, making sure procedures are followed and ensuring that internal affairs investigations are conducted as they should be. While Tommy is normally more of a hands-on person, the slower life agrees with him since he’s over the hill now and has started to feel age creeping up on him. Put that together with the fact that his oldest son Jeremy and his not-officially-adopted daughter Lena are in Europe to visit an old friend, and things are as calm as they could be.

That is, until he and Bokor Baracus are sent to Texas to investigate a child trafficking operation which the Texas Rangers are about to bust. While it might seem odd that an NYPD Lt would be sent to Texas for any reason, Lt. Nolan is no ordinary cop. He’s been gifted every saintly charism you can think of, from flying to literally smelling evil. Over the course of his adventures, he’s picked up a couple of other accessories: a ring with an antediluvian artifact, powered by the spiritual energy around it; and a suit of armor made from the pieces of fallen golems. He’s also run afoul of a great many politicians by taking down a death cult masquerading as a women’s health clinic and unmasking a mayor who turned out to be a warlock. So any chance his bosses have to send Nolan away on assignment as part of the NYPD’s intelligence department is welcomed.

As so often happens when Nolan is involved, nothing is as it seems. Rather than busting a child trafficking ring, Nolan and Baracus uncover an international trafficking and terrorism ring run by the former Jesuit who had been running the show in Coven to turn people into ectoplasmic monsters to carry on his anti-Christian jihad. With the help of Texas Ranger, Lloyd Lerman, Nolan and Baracus set off to Europe, following the trail. Along the way, the saintly lieutenant learns that his son and Lena haven’t been going to school and visiting friends like he thought. Instead, thanks to Jeremy’s training and Lena’s telekinesis, they’ve been working for the CIA, hunting Antifa cells involved in black magic.

Together, they make a formidable force. Yet, for long time fans of the saintly policeman, it will be no surprise that the battle is never an easy one–even when you literally have Hellfire missiles at your beck and call.