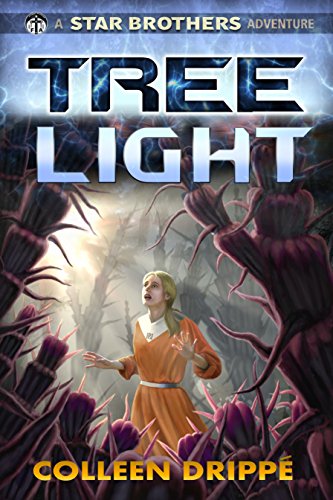 Treelight is another volume in Colleen Drippe’s expanding universe about the order of Star Brothers and its penitent Faring Guard. In this story, Brother Brenden and his guards, Ard Mathew Thirdblade and Gris Wolfgang Bloodbear, are sent in secret to the world of Treelight. The Dagon Ltd company that paid for its colonization has sold its contract to the Pesc Corp. Under the old contract, Treelight colonists were, like serfs, not allowed to leave their colony, and technology was artificially kept at medieval levels. However, freedom of religion was protected, and the Catholic Church was allowed to send visiting priests once every ten years. There are no such guarantees from Pesc Corp, and the Star Brothers want Brother Brenden to visit the colony in secret to find out what the corporation’s plans are and help the colonists deal with the changes.

Marja Sienko is Pesc Corp’s operative, sent to the Treelight to access the best way to prepare the sheltered colony for rapid industrialization and modern development. She like, Brother Brenden, is given a bodyguard. Only instead of a guard who freely chose his post in penance after being exiled from his home world, Franz Wells is a slave, conditioned to absolute loyalty to the good of Pesc Corp.

Unfortunately, Sienko isn’t very good at her job. She looks down on the citizens of Treelight as ignorant primitives and ignores the reality of her employer’s corrupt nature. Although she tries to intrigue the colonists with new-fangled technology and modern comforts, her best efforts are undercut whenever an intrepid colonist questions her slave bodyguard and discovers the real nature of how Pesc treats its people, a reality that Marja patently represses, with as much determination and disdain as she does her childhood faith and inglorious origins in a village not much more developed than Treelight itself. She ignores such warnings at her peril though, as Brother Brenden’s investigation begins to uncover the plans Pesc has for the colony and its hired operative.

The slave bodyguard is also a wonderfully interesting character. A devout Catholic, at heart he is a good person but is helplessly driven to follow through on the evil commands his masters give him. In this dark future a master doesn’t merely control slaves through violence but through systematic mental programming. His struggle between this programming and the wellbeing of his own soul in this story is very moving.

Treelight is a beautifully written story. Drippe’s prose is a breath of fresh air in a climate where the trend is to take the reader on a whirlwind and punch them in the gut emotionally at every chance. Such moments that feel so earned and elegant it’s like comparing the brute movements of boxing with the elegant katas of martial arts. Did I just stumble into calling Drippe the Bruce Lee of sci-fi writers? Yes? Ok, good.

Treelight is a stand-alone book in the same Star Brother’s Universe as Gelen. Comparing this book to Gelen, I can see how much Drippe has grown as a writer. However, I still enjoy Gelen more. The world of Treelight isn’t as interesting or the plot as unpredictable. And yet, the characters in Treelight are significantly better developed, and I found it easier to empathize with them. That should probably serve as your barometer for which book to read first. If you value character development in a story, then Treelight is the Star Brother’s novel for you. If you value fantastic world-building, then it’s Gelen.

This book is perfect for the Golden Age scifi fan and is so elegantly written that although it felt more overtly Catholic than Gelen, it will still please secular readers. Other Christian readers will find this book as accessible and enjoyable as their Catholic cousins. I dare say even a Protestant school library would find nothing objectionable in this book. C.S. Lewis and Catholic Tolkien are proof enough; nothing unites us like a well-written story. Colleen Drippe is proving herself to be a similarly unifying force.