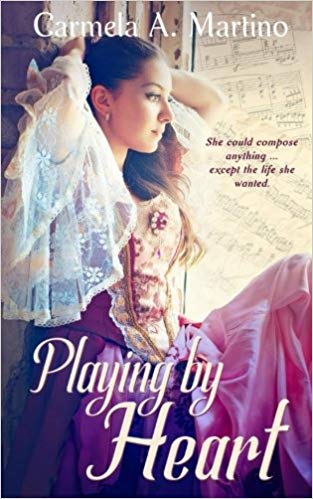 Playing by Heart is a historical fiction romance that takes place during Baroque era Italy. Emilia Salvini is passionate about music. Unfortunately, she has to prove her merit as a musician not only to Maestro Tomassini, but to her social-climbing father, who both underestimate her. Emilia’s musical talents aren’t just a way for her father to show off his talented daughters, but an asset in attracting a husband.

Subscribe to Our Weekly Newsletter with Books 50% off to FREE

Although she doesn’t tell anyone, Emilia hopes that her musical talent will lead her to marry someone who loves music as much as she does. Otherwise, her father will send her to live in the convent since he can’t afford to support all his daughters. What he doesn’t know is that his oldest daughter, Maria, feels called to religious life. He refuses to even consider it, as she is a genius with languages, stating “I will not have her extraordinary talents hidden away in a convent.”

Emilia’s life takes a drastic turn when her mother dies giving birth to a stillborn. The grief she feels at the traumatic event inspires her to compose her own sonata. It impresses her maestro enough to begin giving her lessons in music theory. During these lessons, she works alongside Antonio Bellini, the maestro’s nephew, whom she believes is jealous of her talent. Of course, her friend thinks that there’s love in the air between the two musicians.

It’s not until Antonio composes his own sonata, which includes a duet for a harpsichord and a viola d’amore, that Emilia finally realizes that she has feelings for him.  She is impressed with his talents as a composer as well as his skills on the violin and he tells her of how he was moved by the emotions she put into her compositions. Music becomes the food for their love. Unfortunately, the romance gets put on hold as Antonio takes up a commission with a theater orchestra to help support his family.

Things go from bad to worse when Emilia’s father purchases a villa and enters into the noble class. He arranges for Maria to marry a “rich and handsome” don , in spite of Maria’s wishes to enter the convent. The problem is that the man Emilia’s father chooses to marry Maria has a reputation for being a rake and a scoundrel. Emilia prepares herself to marry the cad to ensure her sister’s happiness. Thankfully, God works in a way that ensures a happy ending for all.

An award-winning Historical YA novel set amidst the musical world of Baroque Italy.

Even though the novel takes place in the Baroque Era, it reminds me of a Jane Austen novel with all the social climbing, beautiful settings, and the preoccupation with making a good marriage. I like that there’s no sibling rivalry between Emilia and Maria. There are times, however, where Emilia feels envious of her prodigy sister and she takes a long time to let those feelings go.

I found myself making a playlist as I read this book as I wanted the right background music to put me in the mood. Most romantic novels always name drop Beethoven and Mozart, but music in this novel came from the Baroque era, which predates the more well-known classical composers. The musical references may not be familiar to the everyday reader, but it will definitely give them something to Google.

The Catholic themes in this novel are appropriate to the setting. The Salvinis are an Italian family, after all, and there is often talk of one of the daughters being sent to the convent when she comes of age.

Overall, I highly recommend this book to young adults, especially ones who have a knowledge of Baroque Era music. It’s a heartwarming romance that will leave you breathless until the very end.

Subscribe to Our Weekly Newsletter with Books 50% off to FREE