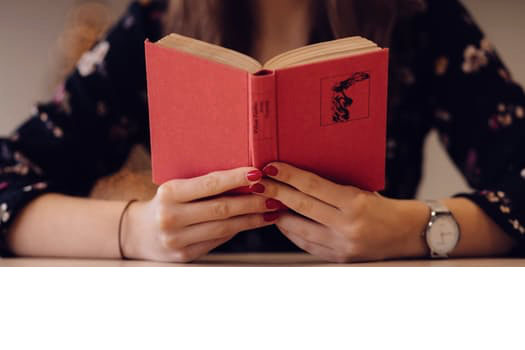 In this episode of the Catholic Reads podcast ARK shares how reading not just apologetics and lives of the saints (both highly recommended) but fiction was instrumental to her conversion and continued growth as Catholic.

My conversion to the Catholic Church was not a happy one. Even after I got over the drama of telling my Bible Belt Church of Christ community and started to enjoy the beautiful things about Catholic culture things still didn’t feel right. I  felt like I was walking around with a pair of those old 3D glasses with one lens blue and the other red. I would have Protestant thoughts and Catholic thoughts simultaneously. I knew why Catholicism was true but I didn’t know how to Be and Think and Feel and Imagine like one. And I wanted to.

Like most converts to the Catholic faith, my conversion involved reading a lot of excellent nonfiction apologetic works and historical documents. (This isn’t something every religion can say by the way. My old protestant church’s conversions were almost exclusively conversions that involved a change in the heart and deep emotional revelations about themselves and their relationship with God, but in the Catholic church I find more of an even mix between that type and a more analytical conversion. It is a great testament to the truth of Catholic Christianity that it attracts so many converts who start out hell bent on cold analytical analysis meant to dismantle the church. I myself went through RCIA twice because the first time I was trying to disprove it.)

But after I became Catholic I found myself greatly conflicted. I had done a lot of research. I knew my Bible, my catechism and my church fathers inside and out. But I didn’t know me anymore. So much of my identity and my goals in life had revolved around my Protestant faith. Even after making peace with giving up my dreams of being a Protestant missionary, there was still so much in my Bible Belt culture that grew out of Protestant symbols, language and assumptions.

In a class I was taking at the time about diversity in fiction, the teacher talked about how in stories involving black criminals it was important ethically to also show examples of law-abiding African Americans, because so many people carry unconscious and overblown assumptions that are causing problems in our North American culture. Now regardless of your views on that topic, or the ethics of being a writer in this modern world, sitting in that lecture I realized that I made these unconscious assumptions all the time about Catholics. Being from the south, I had long been made aware of the dangers of fostering unconscious racism within myself and how important it was to treat everyone respectfully and examine my thoughts, actions and attitudes towards people of a different race from me. But I had never examined my assumptions towards other Christians. I realized that whenever I met someone who said they were Catholic I assumed things such things like, they didn’t know what they really believed, that they didn’t know their Bible. That they were superstitious and did things in their religion out of habit and not out of logical and theological reasons. As I sat there in class a heaviness came over me. I realized that I was still making these assumptions as a new Catholic! The reality was that most of the Catholics I met did know their faith and often had very sound reasons for doing things that on their face seemed superstitious to me.

A few months after this revelation, I was visiting my parents at home and I picked up a copy of Wise Blood by Flannery O’Connor. I had actually read this book in high school. My English teacher at a Protestant Christian school had taught some of her short stories but I remembered feeling as though I didn’t really understand what was going on. Remembering that O’Connor was a Catholic, I decided to reread the book to see if there were things I hadn’t noticed before. Boy was I blown away! It read like a completely different book and was so sarcastic! The first time I read the book I read it as horror but on this second read the genre was suddenly transformed into a comedy! I realized that for the first time, I was understanding a very Catholic joke. The ingrained prejudice instilled in me and my family since before they came to this country faded as I sat on my living room floor and laughed myself silly.

From then on, I developed a passion for finding Catholic fiction. Nonfiction teaches me why Catholicism is true. Fiction helps me dismantle all the generations of prejudice imposed on my brain from the cradle. Fiction allows me to take my strange alien conversion and put it in universal Jungian terms even my non-Catholic friends can relate to.

Fiction taught me how to live and breathe and Imagine like a Catholic.

It is also a key tool of the Church that we are letting lie fallow– and the harm from that is showing.

Our Nonfiction and academic study knows no equal and yet many cradle Catholics fall away by the time they enter adulthood. We train our teachers, we double down on CCE and RCIA resources and yet sometimes it is not the mind that needs converting but the heart.

Be you cradle Catholic or convert, be you Southern, Northern, Eastern or Western– Catholics are a minority in the USA. We are not a part of the established culture. We are immigrants– both new and old. Most Catholics do not live in a society that can reflect back to them Catholic ideals, values or even basic symbol literacy. I do not say this to lament it. I say this to remind us that minorities that survive by harnessing story, symbol, art and imagination.

Consider for yourself the unquestioned assumptions you carry about the church. Ask yourself where your imagination needs growth.

Can you imagine nuns in space?

Can you imagine a mentally disabled disciple, when it isn’t even clear that they understand the gospel?

Can you imagine a world where theology of the body becomes the key to establishing communication with an alien species?

Maybe you KNOW the reasoning behind these things but can you IMAGINE it? Does it feel real to you?

Can you imagine a romance that thrills without becoming pornographic?

Can you imagine a God who exists even while suffering exists?

Can you imagine a world where the multiverse exists and its existence proves God?

I could go on and on listing stories I’ve read here and how they have spoken to me but this won’t truly help you. Jesus spoke to the world in parables for a reason but he also constantly lamented that nobody even had ears to hear with.

Discern for yourself where you need to grow. Pray and study– of course. But do not neglect your heart, your conceptual imagination or your empathic one. Find the stories that push you- challenge you- delight you. And out of that delight the world will be made new.

Courtney Guest Kim joins us to help readers figure out where to start in the long and renowned roster of Catholic Literary Classics!

Roses for The Most High: “Poetry Celebrating the Mystical Christian Path” by Ronnie Smith

Contemplations in the spirit of Merton, perfect for your Lenten season.