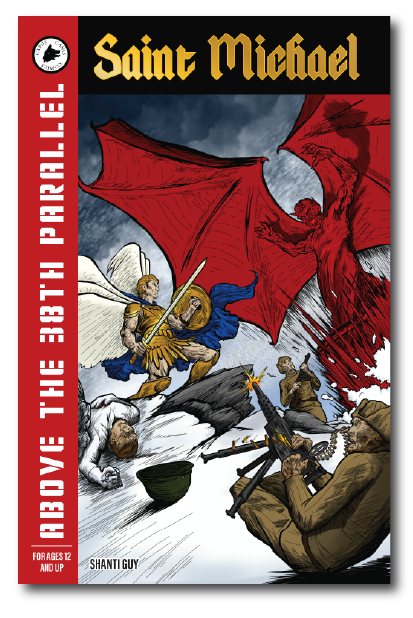 Thank the Lord! We finally have a St. Michael Superhero comic book series! As long as superheroes have been a presence in culture, sarcastic Catholics have been remarking that St. Michael is the real punch-the-Devil-in-the-face superhero, the archetype and inspiration behind Superman, Captain America and all righteous crime-fighters. Artist, author, and Catholic convert, Shanti Guy (with a flipping cool name to boot) has stepped in to show us just how much cooler truth is than pulp fiction.

He promises that each comic installment will retell a different historical apparition of the Archangel. This first book tells the story of when St. Michael appeared to a devout soldier fighting in the Korean war and literally kicked some Communist butt!

When young Marine Mikey is sent overseas, he remembers his mother’s admonition to pray daily to his namesake, St. Michael for protection. At first the other soldiers in his cohort tease the new kid for praying out loud in the middle of battle, but as Mikey proves himself, he gradually wins them over. Before long he’s gotten several other soldiers to start praying the prayer.

“Michael, Michael of the morning,
Fresh chord of Heaven adorning,
Keep me safe today,
And in time of temptation
Drive the devil away.

But no one, least of all Mikey, is prepared for how vividly the archangel would answer his prayer. I won’t go into details and ruin the story. You could google the full story yourself, but I’d encourage you not to.

Guy’s art is also fantastic. Whole panels tell the story so vividly that scarcely a word of dialogue is needed. I can easily see his work holding up to and even overshadowing some of the best Marvel or DC. Suffice to say that Mikey wrote home to his mother about his experience, and the story spread rapidly. “In 1951, Navy Chaplin Fr. Walter Muldy read the letter before 5000 Marines at a San Diego Naval Base. In the 1960’s it became a tradition to broadcast a reading of the letter on a Detroit radio station. The letter was also later published in The Remnant News Paper and Latin Mass Magazine.”

I found St. Michael’s words in particular thought-provoking. Without giving anything away, let me just say that it had me rethinking my own country’s politics on a spiritual level I hadn’t considered before. It has moved me to pray for the souls of North Korea in a manner that had not occurred to me before either. Given the current state of things there, I have little doubt that St. Michael is keeping up the good fight even to this day.

Guy plans on writing a whole series of St. Michael books, each covering a different apparition of the saint. If you don’t have a subscription for your home/school or library I heartily encourage you to change that. I cannot imagine my childhood nerd-self walking by this comic on the shelf without picking it up.