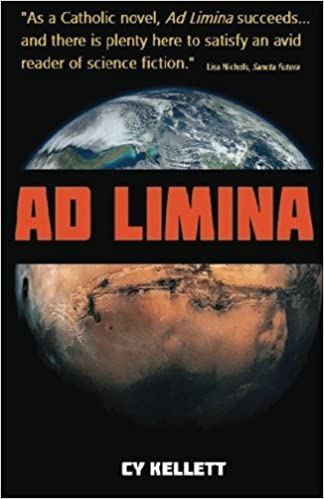 Ad Limina is a fantastic journey across a landscape that explores common sci-fi ideas through the eyes of the Church. It also paints a picture of a galaxy on the brink of war over ideals all too common in our current day and the Church’s conflicted position among them. On one side are the Jupiter Fascists, ruled by a brutal dictator, they at least allow religious freedom, and on the other are the Democratic Liberals of Earth, who classify most religions as hate groups and let things like human-experimentation slide, even as they allow more public freedom of speech and democratic leadership. Bishop Mark Gastelum views both sides with the suspicion of a Catholic who has seen regimes come and go while the Church remains. The contrast was fascinating. I finished this in three days because I could not put it down. That this book was published in 2017 and probably being written long before that shows that Cy Kellet has that presience found in the best of science fiction writers. I look forward to seeing what he writes next.

Bishop Mark Gastelum is the first native-born Bishop of Mars and the first called upon to make the Ad Limina journey, the regular pilgrimage of a Bishop to visit the Pope in Rome. Usually Bishops are called upon to make this journey every five years, but given dangers and expense involved, the bishops of Mars had been granted an exemption. Bishop Mark will be the first to make it. His journey is hampered even more by the fact that the Catholic Church is classified as a hate-group by the governments of Earth, and thus he has to book his transportation on an unregistered transport. Things take a turn for the worse, however, when their ship gets commandeered by the Fascist colony of Jupiter, who have a very special message for him to carry to the Pope.

Over the course of his journey, the Bishop realizes that an interplanetary war is brewing, a war in which neither side has much regard for any religion including his own. Though he finds both sides distasteful, he knows that he- and the Church- will have to pick one eventually.

From there, the Bishop’s journey takes him to all manner of strange colonies. My favorite stop was at a scientific research station where he meets a man named Doug. The subject of an experiment, Doug had his brain removed at a young age and placed in the body of an ape. The Bishop’s and Doug’s conversations about salvation, the nature of the soul, and medical ethics were very moving.

I recommend this book to any sci-fi fan of high school age and up. Kellet’s writing style reminds me strongly of Isaac Asimov and Arthur C. Clarke. There is some discussion of pornography when the Bishop is forced to take part of his journey on a pleasure cruise liner, but nothing is explicitly shown. Still, parents might want to consider that this book does address that adult issue.

Sure to be a science fiction classic, Ad Limina explores the future while also casting a reflective light on our current history. This one is going on my bookshelf for books to share with my children as they grow.

A classic Martian adventure that plumbs the spiritual life of a future humanity.

Ready for the end of the world, battle mechs, and body swaps? This collection of short stories has it all.