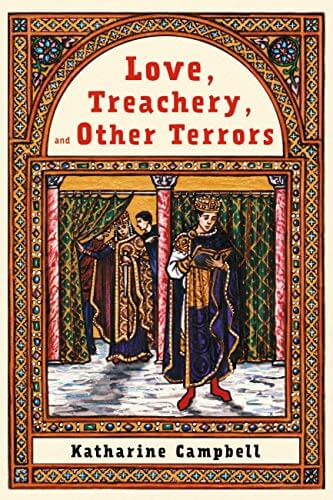 Find most fairy tales too dark or too saccharine? Love, Treachery, and Other Terrors may hit the sweet spot. This quirky fairytale is a fun read with a serious moral backbone.

In an alternative historical version of our world, fairies exist to test human beings and encourage them to live virtuous lives. But some fairies get bored with their calling and begin to manipulate and destroy human beings instead. Unambitious young Prince Alexander is shocked when his father names him his heir on his deathbed. But his troubles are only beginning, as two bad fairies soon persuade his sister to murder their eldest brother and frame Alexander for the crime. Fleeing, with the help of good fairies, to a barbarian city, Alexander soon comes to the attention of the local princess, falls in love, and begins to build a new life for himself. But can such a truly good-hearted prince ignore the suffering that the bad fairies are inflicting on his subjects back home?

This fun fairytale fantasy blends witty and light-hearted writing with loveable characters and a serious plot.

The story takes place in an unspecified historical time, presumably an alternative version of our own world, and includes references that will be familiar to Catholics and some other groups of Christians, such as the Liturgy of the Hours; the division between Eastern and Western Christianity; Greek and Latin languages; and real cities like Paris and Constantinople. The narrative is framed by a ‘this is real history’ device.

The first three quarters of the book moved at a good speed, kept my attention, and were fully satisfying. The climax was mild and perhaps too simple, but the post-climax scenes showcased important Christian values. It was delightful and refreshing to see the hero reach the end still innocent, where so many heroes would have become jaded and worldly-wise.

I very much appreciated the humor throughout and enjoyed seeing Alexander come to appreciate the ‘barbarians’ and their culture. I have fond memories of the two kings! The moral lessons in the novel are the best kind, mostly played out through the action rather than spelled out in words. The novel contains a strong message about the importance of not going along with wrong-doing, and how sometimes the refusal to collude is all that is needed to take a bully’s power away.

This book is especially suitable for teens, since it has a major coming-of-age theme, but would also be suitable for mature children, especially as a book read aloud to them. Adults are also likely to enjoy this story. Although Alexander is only sixteen at the beginning of the book, he is already a functioning adult in his historical society (old enough to be crowned king). The book involves marriage, presented positively and cleanly.

Overt religious content is minimal and intrinsic to the time-period, therefore most secular readers should be comfortable with this book as long as they are happy to read religiously-realistic historical/fantasy fiction. The medieval-style Christianity feels more Catholic than Protestant (unsurprisingly) but Protestant readers are unlikely to find anything to offend them or spoil their enjoyment. In short, this book is appropriate for all fans of fantasy fiction, especially those who like humorous, lighter stories or fairytales.

If you want a gorgeous read delving into the world of angels that reflects actual accepted beliefs about them then this is the book for you.