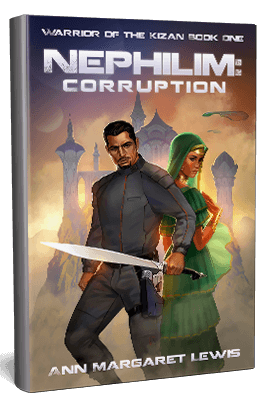 Within 24 hours of Dakhar’s being tasked with guarding his world’s royal family, Princess Tasia of Emun is kidnapped from the palace. Her planet has long been at war with the Nephilim—demonic looking cursed members of her race who have fallen into sin. Without regular cleansing at the temple any native of Emun can become corrupted into one. What follows is an exciting chase as Dakhar seeks to return her home. All the while he is fighting off the corruption that threatens to turn him into the very enemy he fights against. As he tracks her, Tasia is taken to an ancient planet known only to her people in myth: Earth. Using her wits and diplomacy, she escapes, finds allies, and seeks to stay one step ahead of her captors until help can reach her. Thrown into the midst of it all is Saul, Tasia’s lost-long cousin. He has grown up on Earth, and though he possesses the telepathic abilities of his kin, he knows little of his home world. What he does know is that his father has changed, and drawn him into dark schemes from which he must free himself.

In the space-operatic world of Emun, God speaks directly to the minds of men within his temple, and angels give judgement at court hearings. It’s an imaginative world of ancient Sumerian culture, and beautiful solarpunk technology. There is also an element of romance between Tasia and Dakhar that is appropriately squeal-worthy. It’s no surprise that Lewis has experience writing in the Star Wars universe because in many ways, this is the fun and spiritually deep epic I wish that universe could be. (For those interested Lewis wrote the Star Wars Essential Guide to Alien Species & the New Essential Guide to Alien Species.)

It’s also a book that taps into a new small subgenre I’ve found rather intriguing of late: solarpunk. Developed in contrast to cyberpunk, solarpunk usually involves some sort of utopian world where the primary technologies are plant-based or at least ecologically friendly; like space ships grown from bioengineered plants. It’s a very nascent subgenre but if you need a break from the more nihilism and noir inspired sci-fi, Warrior of Kizan may be an excellent introduction to a subgenre tailored for you.

Lewis proved herself a genius at writing character with her Sherlock Holmes pastiches, Murder in the Vatican and The Watson Chronicles, but this is the first time I’ve encountered characters entirely of her making and I am not disappointed. Dakhar, Tasia, Saul and all the other characters feel very real and distinct and I am biting at the ropes to read the sequels. Dakhar and Tasia’s love story is toe-tingling without getting inappropriate for younger readers and I found Saul’s social awkwardness amusing and loveable.

If you’re looking for the next great sci-fi or YA adventure, this is the book for you. Christians of any denomination will appreciate the themes and Biblical references. Though non-Christians might chaff at the premise, I think they’ll too be hooked by Lewis’ excellent writing within the first few pages. It also has that Star Wars like quality that makes it likely to appeal to Y.A. and adult sci-fi fans alike. I can say with no exaggeration that I’ve found my next series to squeal about under the covers until my husband snaps at me to “Go to sleep already!

The first nation in space has sworn off religion, but now they need the help of Fr. McCellan to solve a murder and save them from religious terrorists.
Read More