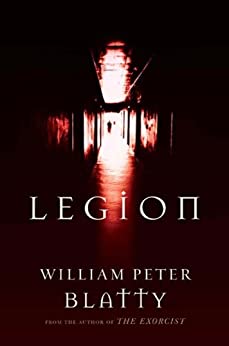 Let me just say right off the bat that this book has the single best plot twist I have ever read.

A sequel to Blatty’s famous The Exorcist, I was initially skeptical, thinking that this might be one of those sequels that the publisher pushed the author to write, rather than one that flowed naturally from the events of the first book. To my surprise, I enjoyed this even more than The Exorcist.

Legion follows the Jewish detective Lieutenant Kinderman as he investigates a string of murders, beginning with the cruel crucifixion of a young boy. Impossibly the murders mirror that of a long dead serial killer. Is this a copycat, or is something supernatural afoot? After the events of The Exorcist, Kinderman is no longer sure. Following the tradition of his Jewish faith to wrestle with God, and grieving the death of a friend from the first novel, Kinderman is struggling to reconcile the concept of a loving God with a world where pain and evil seem to rule the day. The result is a book that provides the reader a language to reconcile this problem in terms that Catholics, Jews, and Atheists will understand and find comfort in. For this reason, and that thrilling plot twist, it is my personal favorite of Blatty’s trilogy.

It’s also worth mentioning that, unlike The Exorcist, I did not find this book scary, perhaps because the only dead child in the book is in the first chapter. And his murder, while sad and disturbing, is not dwelled upon for long before the plot moves forward. There is another murder later in the book that some might find scary, as it involves some penis mutilation. Perhaps my inability to physically empathize blunted the horror of it for me.

One thing I especially appreciate about Blatty is that even though he is a horror author he never relies on gratuitous violence. Gratuitous violence happens, of course, but it is never dwelled up or described in a way that would encourage the reader experience excitement or entertainment. Blatty shows he is a true master of his craft by instead using the beauty of language to confront true evil. The greatest thrills his stories give come from moments when the characters trust a higher power and fall into the arms of grace without any sort of spiritual comfort to cushion them. While the killer in this book mutilates and degrades his victims, the book itself does not revel in that mutilation but describes the facts of what happened in a manner respectful of human dignity.

Blatty continues to prove a reliable author for both the Catholic, Protestant and secular reader and a credit to Catholic arts everywhere. Although the events in this book can be understood without having read The Exorcist, they will be better enjoyed if you have read the first book.

Looking for a book that puts Christ not just back into Christmas but into Halloween too? Throw in a dash of ghost story, mystery, and romance and you have A Tortured Soul.

Where to Begin with G.K. Chesterton

Chesterton will swoop down, carry you away, pour tonic down your throat and tickle you until you start to laugh