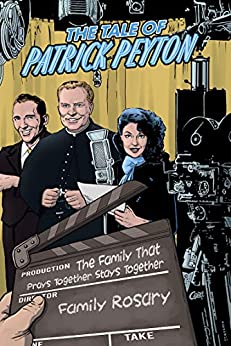 Take a step back in time to the early 1900s and experience the life of Venerable Fr. Patrick Peyton (1909-1992). If you’re not familiar with the name of this Irish-born priest, you’re not alone, but you may be familiar with his message that “the family that prays together stays together.” Ordained in 1941, Venerable Peyton spent much of his life orchestrating worldwide Rosary Crusades—the pledges of millions of families to say the rosary every day in order to promote peace and bring families together. He also participated in Catholic media production in Hollywood, beginning with a single radio broadcast and spreading to movies.

This graphic novel takes you from the shores of Ireland at Peyton’s birth, his decision to move to America which led to his opportunity to enter the seminary, and follows the other major events of his life all the way until his death. Throughout his life, you’ll witness the intercession of the Blessed Virgin Mary and learn how Fr. Peyton responded to her generosity by spreading devotion of the rosary to families in America and beyond in the aftermath of the Second World War. A few cameos from famous Catholics and Hollywood stars of the time add a fun ‘who’s who’ level to the book.

The comic is easy to read and progresses quickly through major events. It’s ideal for young children and families—which I’m sure Fr. Peyton would appreciate. The plot follows his life story, and every conflict gets resolved relatively quickly. Such speedy resolutions are well suited for young readers who might not be able to follow subtle plots. For more mature readers, some of Fr. Peyton’s struggles might seem too easily resolved, and the people in the novel may lack depth. Historical tensions with communism and the CIA in this Cold War era are absent. Nevertheless, every reader finds a lesson in this graphic novel about Fr. Peyton’s childlike and earnest faith. He was known to be very charismatic. Perhaps the struggles in our own life would be so easy with a faith like his. The work also shows a stark contrast to mainstream Hollywood as it seems now. It’s hard to imagine men like Venerable Fr. Peyton or Venerable Bishop Fulton Sheen becoming as respected on radio, television, and film today. And yet this one Irish priest was able to connect with Bing Crosby and others to advance Marian devotion!

With the strong emphasis on Marian devotion and a Catholic worldview, the graphic novel is likely not compelling for Protestant or secular readers. The final pages—with a brief prose biographical recap and an explanation of the canonization process—reinforce my view that this is really designed for young Catholic families. The book serves as a great encouragement to say the rosary together and dedicate ourselves to Mary’s care. It’s an easy read to bring this man on the path to sainthood to life rather than left forgotten in the last century.

What can a man do to love his family as he should?

Fatherly protection of St. Joseph, first with the Holy Family and then in the Universal Church, is needed now more then ever to protect and lead us.

A mother reveals with honesty and authenticity the difficulties of raising a child with autism and the struggles that child faces every minute of every day.

If you’re a care-giver for a chronically sick family member or friend, this book is for you and your healing.