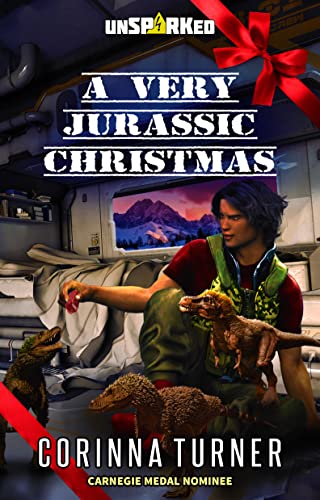 Jurassic dinosaurs, Christmas, family, farmers, hunters, putting others ahead of yourself, dystopian future

What’s a mama Allosaurus doing hatching baby chicks in the winter? Teen hunter Joshua and his Uncle Z can hardly believe it. The worst part is this mama is starving, and she’s willing to do anything to keep her babies alive. Seeing this sweet but dangerous dinosaur care for her chicks, Joshua convinces his uncle to transport all of them in their Habitat Vehicle (HabVi) to a zoo in the south. He even names the chicks Gold, Frankincense and Myrrh. The mama Allosaurus was given the fitting name of Star. It should be an easy trip, as long as there’s plenty of fuel; the tranquilizers don’t run out; and the chicks don’t bite off any human fingers.

Hosting Christmas Eve carols is the perfect way to start off the Christmas season, according to Darryl. She and her brother Harry have spent all day decorating and getting everything ready for the neighbors. Their father has made sure the fence is secure, so no raptors can disrupt the event. There’s only one problem: the guest of honor, Father Benedict, is late–very late. In raptor-infested mountains, this usually requires a rescue mission with hunting gear.

In “A Very Jurassic Christmas,” Corinna Turner has created a wild world with fully realized dinosaurs living side by side with humans.  I was on the edge of my seat reading Joshua’s story.  An Allosaurus is enormous and barely fits inside the HabVi. What if this mama wakes up? Yikes! Consider travelling with a modern day alligator on tranquilizers in your SUV, and that is only a taste of what Joshua and Uncle Z went through. Instead of falling into panic, Joshua and Uncle Z were so calm and seemed to be able to handle whatever came their way― which was a lot more than just the dinosaurs. In Darryl’s story arc, we see a teenager who has ideas of how her Christmas should be, but her plans keep getting interrupted. Will she ever be able to enjoy this Christmas and learn a lesson in patience and humility?

The two story arcs in the book are well written, with authentic-sounding dialogue. Only one character and a fictional saint who lived unharmed in the wild near dangerous raptors, cross over into both stories. All of the characters are Catholic―even if they don’t attend Mass often. Catholic themes are present in both stories. Putting others ahead of yourself is a major theme and one that seems to be needed in today’s world.

“A Very Jurassic Christmas” is a prequel to the first novel in the Unsparked series. This is the first one I have read, and I am already hooked. I want to learn more about Joshua, Darryl, and this fictional saint that has a huge following among the dinosaur hunters and farmers. The story is fun and fast-paced. This could be read in a day, which I love. Although this is a Catholic book, I would recommend this to anyone who is fascinated with dinosaurs.

Bereft of a mother & betrayed by his twin, Jarret fights for a place to call home, unaware a supernatural war threatening to damn him to hell itself.