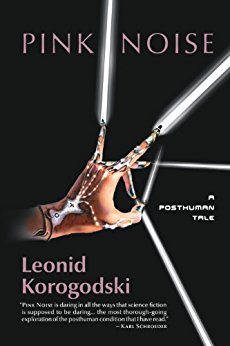 Pink Noise is a hard cyberpunk adventure set in a feudalistic colonized space. The story follows a captured child and a slave who band together in a race across Mars to gain their freedom. The twist is that the child is really the Princess of Mars imprisoned by the enemy when they took her castle. The slave is a Post Human whose memory is regularly wiped so he struggles to remember his enslavement, to know what is truly real. (For those unfamiliar with the term, a Post Human is someone who has had his or her consciousness uploaded into ethereal digital form, a la Raymond Kurtzweil’s Singularity.)

A Classic Martian adventure that plumbs the spiritual life of future humanity.

What really makes this story special is the internal crisis going on in Nathi, the posthuman. In his physical life, he was raised in the Zulu-Zionist faith of his tribe. Zulu-Zionism is a mix of Evangelical Christian doctrine with native Zulu mythology. At its heart, Pink Noise is a look at the spiritual problems of cyborg technology. After all, if baptism unites our death to that of Christ’s, can an immortal really receive the sacrament? For all the pulp action adventure in this novel, the story is incredibly ambitious and deep. Nathi’s slavery is as much spiritual as it is physical. Although the core of the story is truly Zulu-Zionist, Catholic sci-fi fans will appreciate a book that explores the sacramental life of a Post Human.

However, this book is not for everyone. The book has more hard science in it that will suit most readers’ taste. There’s even an appendix that explains all the science behind the giant space battle at the end. The references to Zulu Zionist symbols are also confusing at first. It wasn’t until I began researching them for this review that I realized the ethical conflicts that Korogodski explores. On the surface, this is a typical hard sci-fi Space Opera but it goes so much deeper than that. I’ve read this short book three times already and each time I find new layers to the story. That said, Pink Noise does not fail to reward the reader who enjoys learning and pushing the boundaries of conventional imagination. Though not for everyone, cyberpunk and hard sci-fi fans will cherish Pink Noise as a hidden treasure.

Surviving the Black Hole was only the first part, now Dex will have to survive the far future and reunite with Santiago.