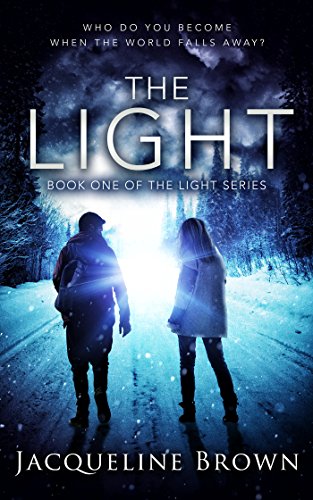 Jacqueline Brown’s The Light is a young adult dystopian novel. However, unlike The Hunger Games, the dystopia has just begun and focuses more on the people who are just trying to survive after an EMP causes a nation-wide blackout. Bria and her friends find themselves stranded in the middle of the Virginia countryside. With help from two kind strangers, they find a place to stay. Bria soon finds herself in the middle of a personal identity crisis as she discovers that the mother of one of the strangers used to be best friends with Bria’s deceased mother. Bria also learns that her parents used to be Catholic.

This book is a more personal type of dystopian young adult novel. Instead of the typical “freedom fighters vs corrupt government” narrative, the story focuses on how survival affects ordinary people. The question this book asks is “Who do you become when the world falls away?” The “apocalypse” acts as a fitting metaphor for Bria’s own identity crisis, as everything she knew about her life completely falls apart. Bria learns how to survive on a farm as autumn transitions to winter while she learns about her parents’ past. The good news is that Jonah’s family accepts Bria and her friends as part of their family and don’t act judgmental about her atheist views.

Bria seems to be an atheist by circumstance, blindly believing her father’s vitriolic views about God. She also sees herself as unworthy of any kind of love, whether it be romantic or familial, because of a previous abusive relationship and the fact that she never properly mourned her mother’s death. Her tendency to self-sabotage affects the growing relationship she develops with Jonah. Jonah was originally intending to become a priest, which complicates things further.

See Reviews for the Rest of The Light Series Here

One of the few things that confused me about the novel was Mick, the supposed antagonist of this story. I think the story of everyone surviving in a modern world without electricity was enough. I also didn’t like that the book ended on a cliffhanger. It made the book feel unfinished for me.

I recommend this book to young adults who are fans of Lost or other survival stories, as well as for fans of dystopian YA fiction. The themes of atheism vs Catholicism aren’t heavy-handed. In fact, the viewpoints are discussed in an open and civil manner. The Light is an engaging, but a heartfelt story that will leave readers wanting more.V