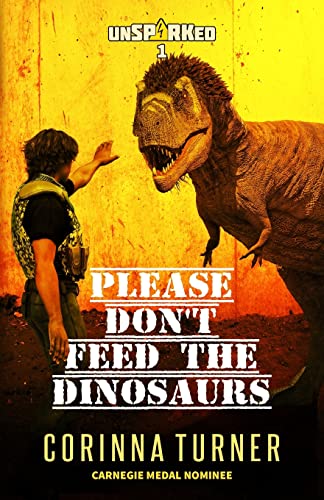 Darryl is a self-assured, sharp-shooting teenage girl, who’s been raised in the countryside as a rancher. What sort of animals does she raise? Dinosaurs! And defending these docile herbivores from the carnivores prowling just outside their tall electric walls has taught her how to deal with predators. But now, her father is marrying a fashion designer who has never set foot outside the city, much less seen a raptor. Having little say in the matter, Darryl will just have to make sure her new step-mom gets to the homestead safely, and hopefully not so scared that she decides to leave their family before she’s even set foot in their house.

Meanwhile, Dino Hunter, Joshua is saying goodbye to his raptor friend. Only eighteen years old, grieving the loss of his Uncle Z and dad, and facing discrimination for his profession & background, Joshua has to convince a bunch of city-slickers that he knows what he is doing when it comes to training, raising and capturing dinosaurs. For the first time in his life he is all on his own and if he wants to keep his job he’ll need to prove himself. But when an accident happens at the zoo he is soon inundated with too many opportunities to do just that. This day might be a pain in Darryl’s and Joshua’s neck, but it’s all good rollicking fun for readers.

Turner gives us a future that Jurassic Park fans have been wondering about for years. The whole of human society has adapted to having these genetically resurrected monsters running about. Not only are there Dino-ranchers like Darryl, but the way that roads, cities, and cars are constructed all reflect the new reality. The book alternates between chapters of Joshua’s unlucky day at the dinosaur zoo and Darryl’s road trip across dino-infested North America. It is fascinating to see how Turner’s world has a whole new set of traffic laws and safety measures specifically for dealing with things like stampedes, herd crossings and raptor attacks. It’s also fascinating to see the sort of social rules and psychology of the dinosaurs that Joshua can intuitively navigate. In fact, he is much better at negotiating raptor social politics than he is human ones. In another writer’s hands this could become a horror novel, but Joshua and Darryl are both such capable and intelligent young heroes who have a grounded maturity far beyond their years. I also must personally say that I haven’t crushed on a fictional character as much as I did Joshua in a LONG TIME. No doubt Darryl will earn her share of fans as well.

The subject matter and book cover are all meant to appeal to a young audience, but honestly anyone who is in the mood for a short and fun action adventure is going to gobble this story up.

As far as the catholicity of this book, I’d classify it as ‘covert’ or ‘representational’. Joshua, Darryl and her family are all staunch Catholics. Darryl’s dad even has a little statue of a new saint on their dashboard whose story is all tied up in a miracle involving dinosaurs. Joshua himself offers up prayers to this patron of dinosaur hunters a few times. The family dynamic Darryl has with her widowed father and younger brother is wholesome and affirming without becoming melodramatic. Joshua’s lonely life makes a sharp contrast to Darryl’s story as he is all on his own but is reminded that he still has a community that will support him. At the start of the story he is in a world that only sees him as a stupid and backward hunter but he proves to himself he is more and finds people to whom he has nothing to prove.

If you’re looking for a strong, positive family representation, this book is a solid example. Aside from references to their prayer life, the Catholic themes and motifs are not the focus of the story, so if you’re looking to support a Catholic artist but also looking for a book to recommend to a non-Catholic friend, this is a good one to include.

If there are any flaws in this story, it’s that it’s too short for an adult audience and while Joshua and Darryl’s stories complement each other very well the two heroes never meet. Hopefully they’ll meet each other in one of the sequels. I wanted to immediately buy the next book as soon as I finished this one! The depth of detail in the world-building and characters will leave you with plenty to think about long after you finish reading.

Fr. Ruiz has little idea what he’s getting into when he takes a post on the isolated and pagan planet of Fen.

Courtney Guest Kim joins us to help readers figure out where to start in the long and renowned roster of Catholic Literary Classics!