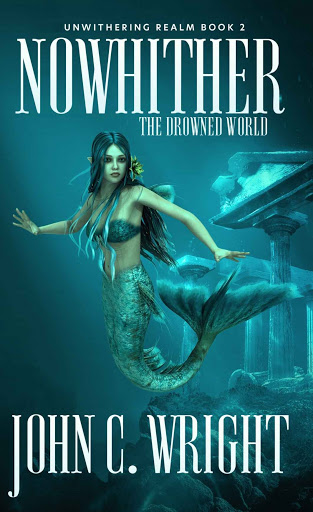 Nowhither: The Drowned World is the first part of the long-awaited sequel to Somewhither, my favorite sci-fi/horror book of the last several years. In that book we were introduced to Ilya Muromets, descendant of Cain from an alternate reality and raised by a Templar Knight. The Templars have been charged since the middle ages with defending our reality from the denizens of The Dark Tower, a nigh-unstoppable race from yet another reality in which the Tower of Babel never fell. The power of the Tower’s servants comes from their ability to use astrology to predict all of the base actions of any being in the entire multiverse. Only by acting in accordance with their higher natures can Ilya and his friends avoid the gaze of the astrologers.

Somewhither ended with our hero breaking his word to a vampire whom he had promised to spare, a base act that resulted in an immediate onslaught from the Tower’s forces. Nowhither picks up with Ilya and his friends escaping into the reality of the wonderfully named Penny Dreadful, an actual siren Ilya has been infatuated with for years. Unfortunately, they escaped into a chamber filled with water at the bottom of an ocean.

Thanks to the various abilities of the group (Too many and too complicated to go into here.  Suffice to say, Ilya makes creative use of his shapeshifting abilities.) they are able to escape, only to be again trapped by Penny’s people.

Here the story does bog down a bit. Wright spends too much time describing the mesmerizing effects of the sirens’ beauty and their song as they move Ilya from place to place and interrogate him. It isn’t that there isn’t any point to these pages. We do learn a great deal about the Wisecraft, an alliance of magic-using races from around the multiverse, and Illya’s friend Foster, as well as the shifting allegiances of the sirens but it could have been more concise.

Unable to glean anything from the young would-be hero, the sirens deliver him to his brother, now a full-fledged Templar, there as part of a delegation from the Ecclesia, a union of nine realities, each ruled by its own version of the Catholic Church.

During his conversation with his brother and father (also part of the delegation), Ilya is forced to realize that he hasn’t been acting like a man at all, much less a hero. He’s been behaving like a selfish adolescent, and the Tower’s invasion of Earth is in part due to his failures.

The story ends rather abruptly, with Ilya finally coming to grips with the changes he has to make in himself, and what he needs to do to be able to rescue his friends from the sirens and ultimately defeat the Dark Tower.

Wright’s work is always highly entertaining, full of strange, imaginative and fully realized worlds and characters. While Catholics will certainly get the most out of the book, Christians of all kinds will appreciate not just the high adventure but the important role that prayer plays throughout the story as Ilya overcomes injury and temptation at various points throughout.