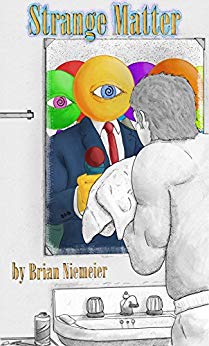 Ready for the end of the world, battle mechs, and body swaps? This collection of short stories has it all. ﻿

Strange Matter is a collection of short stories from one of my favorite contemporary authors. Niemeier has a range of talent, covering various genres in this volume including sci-fi and horror. It ranges from the whimsical to the terrifying, to the thought provoking.

The first story, “Beta Geminorum” starts off like a normal detective story.  Main character, Detective Enrich responds to an apparent suicide. The body seems to have fallen out of nowhere onto a windshield. However, closer inspection reveals a number of maddening details. Despite outward appearances, the body clearly isn’t human. It is completely uniform throughout, like a piece of cheese. And it bears a striking resemblance to Walter Cronkite. Still, it likely would have faded as just a strange blip if not for what happened four days later. With no other warning, billions of the same body fell from the sky, causing terror and confusion throughout the world. It was only for one day though, and the world eventually recovered.

Enrich did not let it rest though, and he spent the next several years trying to discover the cause eventually realizing that the Walters fall coincided with an alignment between Earth and the star Beta Geminorum 33 years before. He figures this out just before the 33rd anniversary of The Fall, just in time for another rash of things to start falling from the sky.

“Strange Matter”, the story that gives the book its title will be more familiar in some ways to avid sci-fi fans. Russel begins his day shaving as many do. Things get odd though when he finds himself shaving again, and again, again. After a brief period of wondering if he has gone crazy, Russel realizes he is reliving the same 10 minutes over and over. Through a lot of trial and error, he eventually realizes that the cause is a particle accelerator test that happened nearby. A test that may have actually ended the world.

Naturally, he tries to stop the test. I’ll say no more expect to say that despite his best efforts, he doesn’t manage to do so. What he does manage, is to learn that he is not alone.

“Elegy for the Locust” which provides a little more background into the world of the author’s Soul Cycleserieswhich explores what happens when we let envy rule our lives.

“Anacylosis” functions as a preview of Neimeier’s next series, Combat Frame/XSeed and a thought experiment on what future religious orders might look like.

“Izcacus” is an attempt to marry the scientific and mystical vampire genres in the Caucasus Mountains.

All of the short stories are fun and well-written. If you are looking to support a Catholic author who manages to explore serious issues while writing entertaining fiction that will appeal to the average reader then Strange Matter by Brian Niemeier is definitely something that should be on your reading list.