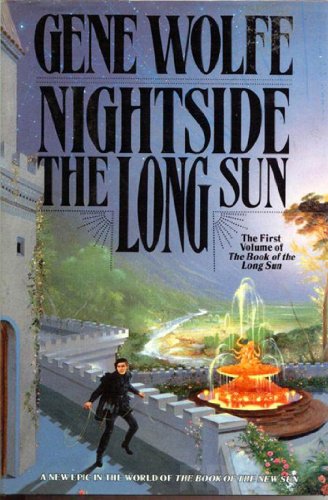 Update: We adeed our podcast episode Debating Gene Wolfe to the review.

The best way to read this book is in one day for if you start in the late morning and read until sunrise you can experience the action in real time. When the protagonist Patera Silk is trying to climb over an insurmountable wall, break into a heavily guarded castle at midnight through the roof, and then escape from certain death you feel just as worn out and excited as the character, especially when he miraculously arrives back home alive at four in the morning with a broken ankle hungering for sleep but then singled out to solve a murder mystery and expel a demon. Gene’s brilliant style and pacing immerse the reader into the heroes exhilarating and exhaustive experiences allowing the reader to partake in the protagonist’s dedication and search for truth in his sacred work as a priest.

While Gene Wolf’s sci-fi story is exciting enough, it is rather Gene’s integration and interaction of differing worldviews which held my attention and piqued my curiosity to continue reading the series. In his Long Son Series, Gene brilliantly introduces the lifestyle and meditative Catholic priest who constantly recognizes God in his thoughts and actions throughout the day while blessing those he encounters in the name of Pax with the sign of addition. But through the adventures of the priest, Gene seems to be asking, if you as a Catholic realized the faith you practiced was false, would you give it all up for the truth?

Gene sets up rite against right as he collides the world of Patera Silk, the scrupulous and intellectual yet cunning passionate priest immersed in the rules and rituals of his polytheistic religion, with that of a simple and sincere professional thief named Awk when the protagonist seeks to steal the Parish property deed from the powerful and feared rich man, for the sake of social justice. Gene challenges the reader again in his moral values when Silk is sought out as the only one who can cast out a demon from a house of prostitution. Here the Priest fails even when perfectly following his religion’s special rites. Throughout the process of the exorcism, Gene describes the lives of the young women residing there as desperate, and the owner’s business as entering the arms of mercy and care to provide the poor girls community, money, and shelter. The comparison between the exorcism rite’s empty words, to the obvious effect of the saving corporal acts of mercy the house provides, shows the limits of the pagan religion as well as the vain power of hypocrisy.

As the Catholic Church’s culture and religion readily appear disguised as a pagan religion, the Catholic reader becomes increasingly frustrated throughout, wishing that Silk would stop believing in the gods as Awk, but not desiring Silk to give up all the ‘Catholic’ rituals, liturgies, and obligations the pagan religion follows. While it appears that Silk must through the baby out with the bathwater to find peace, Gene does not lead the reader through this conflict without hope for Silk. At the very beginning, Gene establishes that Silk has had a revelation from a god he calls The Outsider. This ‘Outsider’ resembles the God of Israel as the reader senses that qualities of this god are not like that of the others, as Gene reminds the reader through Silks wonder and joy when speaking and thinking of the Outsider.

In this series, Gene forces the secular reader to re-examine seemingly silly rituals for their true meaning purpose and good. At the same time, it forces the Catholic reader to reflect on the shallow hypocrisies that can creep into their own personal faith and daily ritual. (Note: this does not become absolutely clear until the very end of the Long Sun series when the reader is forced to re-examine their measures of holiness and any latent hypocrisy.) Unfortunately, in a scene where Silk’s chastity is challenged, Gene creates unnecessary pornographic images. At the end of the book Silk’s uncharacteristic euphoric thoughts, upholding his temptress as the ideal standard of beauty and virtue not only imply that Silk did get to ‘know’ the temptress but celebrates it, for Gene makes it clear that the ‘known’ woman is who motivates and affirms Silk’s final choice of action. Because of Gene’s overall sexualized women characters and the hypocrisy of upholding the virtue of Chasity in his writing, I am cautious to recommend and conflicted about promoting the series. Unfortunately, although Gene challenges any preconceived ideas of what it means to live a good life, by mixing the weeds with the wheat, he fails to give a richer alternative religious worldview as he indulges in sexualizing his women, and leaves the reader wondering if Catholicism or ‘Nightside’ has any value at all.