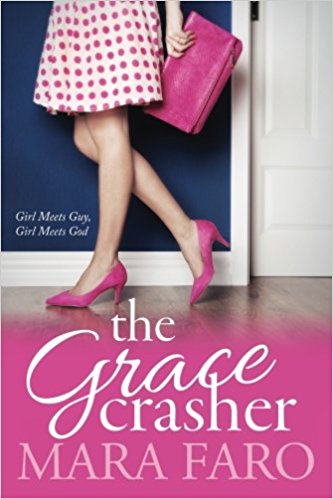 You know, Catholics do a lot of weird stuff. Who else buries St. Joseph statues in the backyards of houses we want to sell? For that matter, Protestants do a lot of weird stuff too. Who else would have thought to bring a rock band into Church? The Grace Crasher is a surprisingly respectful story that allows both sides to have a healthy laugh at their own quirks and foibles. Regular romantic comedies are about taking two people of two different worldviews and having each learn to take the best from each other and reconcile their differences. The Grace Crasher does that in a bold way that few authors would dare try. Although the heroine comes back to the Catholic Church of her childhood, her romantic lead does not convert, remaining true to his Protestant beliefs. However, both slowly learn to overcome the shortsighted views each has of the other and become better people, and better Christians because of it.

Julia is a young college graduate desperate to move out of her home with her alcoholic father and codependent mother. She wants to find an apartment, hopefully, close to Dylan Heath, lead singer of a local indie band, The Misfit Kens, and Julia’s current obsession. Luckily for her, the apartment she wants is just down the street from Dylan’s home.

Unfortunately, the landlady’s ad heavily implies she is looking to rent to a Born-Again Christian. Determined not to let such a trivial thing stop her, Julia swings by the local “ChristianMart” to pick up all the Jesus fish bumper stickers and Bible highlighters she can find to pass herself off as “Born Again.”

It’s a hilarious opening scene during which her friend is following her around and schooling her on what lingo to use to successfully fake it.

“First lesson,” she says, “You can’t do a Catholic/born-again mash-up. See, it’s like Goths and Emos—we think the groups are similar, but they get mad if you lump them together.”

However, when Julia does move into the apartment she begins to fall for the landlady’s Evangelical son, Mark—who knows she’s not really a Christian. What he doesn’t know is that she is something worse: a fallen away Catholic. His sincere and awkward attempts to convert her become steadily more adorable as it becomes evident that what he really wants to do is ask her out. What follows is a hilarious romantic comedy in which Faro somehow manages to be respectful of Catholics, Protestants, and Atheists alike.

And yet this story is deeper and smarter than a regular light comedy.

As Julia begins to fall in love with the respectful, sincere Christian boy, she starts to face the insincerity and disrespect rampant in her relationships with her family and other men. She eventually finds her way back to the Catholic faith of her youth through the example of the Protestant friends she makes along the way.

I heartily recommend this book to both Catholic and Protestants alike, especially if they are related to each other. This book got me to laugh at both my current Catholic self and my old Evangelical self, and love both. I particularly liked the part where Julia attends one of Mark’s youth events and is completely baffled by exercises like writing her sins on a piece of paper and shredding them. I remember one time on a youth retreat, I was given a ball of clay and told to shape a clay pot that would “symbolize my soul.” All people, Catholics, Protestants, and secular people alike do some really odd things to express the meaning we find in our lives.

Now, this isn’t to say that we should stop doing weird stuff. (For that matter, I really like my souvenir clay pot!) It was fun to try and apply an artistic way of thinking to self-reflection. But I think learning to laugh at ourselves sometimes is just as healthy.

Atheists too will find this book a sociologically amusing and yet sincere and respectful comedy. There aren’t that many atheist characters in the book, but the ones that do show up have just as much integrity as the Catholic and Protestant characters.

After all, we’re all human. Normally it is simply a humbling thought. Reading this book makes it joyful as well.