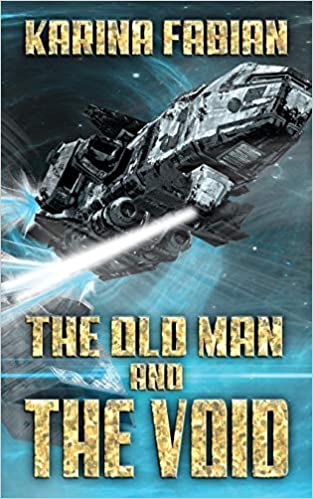 Dex Hollister is a Relics Hunter and an old man; his wife died from a devastating disease, and his apprentice is all grown up and has her own crew. Dex skirts the boundaries of black holes, fishing out priceless technology of a long dead alien civilization. Though the small drones and flotsam he catches earn him more than enough to keep his crew well fed, he sometimes spies a glimpse of the real prize—a huge alien warship slipping in and out of the event horizon. On an impulse, he sets out with only Santiago, his ship’s A.I., for company and attempts to catch the fabled alien ship. When it pulls him into the black hole, this old hunter is in for the ride of his life, confronting both the perils of spacetime and the echoes of ancient alien gods.

The author, Fabian, says she conceived of this book as “Old Man and the Sea set in space,” but she takes that concept and runs with it to make something truly arresting. The alien cultures that built the warship may be dead, but their robots continue their battles even in the darkest corners of space, giving the book an almost ghostly atmosphere. Dex is still mourning his wife, making the melancholy all the more potent. Fabian also explores the nature of time with Dex suffering from a disease that forces him to relive, in visceral detail, random moments from his past history. It’s not PTSD. He relives good memories just as often as bad ones. His disease is called Disk Activated Memory Disorder (DAMD), a unique affliction of those who spend too much time near black holes. Amidst these recurring hallucinations, Dex also begins to dream that the alien gods are visiting him, toying with and testing him. Part of the mystery is whether these beings are real or echoes that Dex is picking up as his ship travels the time-twisted currents of the black hole.

This book is one of Fabian’s more covert-Catholic books, and it deals with concepts of godhood much the way that the original Star Trek did. If these ancient gods are real beings, they are more akin to super-powered beings, and Dex refuses to bow to them—hinting at his faith in a truly omnipotent and omniscient creator.

This book is excellent for any science fiction fan of any worldview, or for fans of Old Man and the Sea. You don’t have to understand the science of black holes (I don’t) in order to tap into the book’s themes of survival, grief and maturing into old age. Dex Hollister proves that character growth doesn’t end when childhood does.