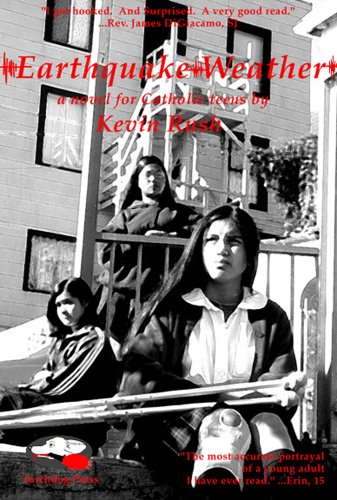 Kristine lives in St. Denis in San Francisco Bay: “part nice, but part run down, an there’s some gangs aroun.”  It’s not quite the ghetto, but it’s not quite out of it either. Earthquake Weather follows Kristine over the course of one summer as she begins to grapple with things far beyond her maturity, like the danger that the sweet boy who quotes poetry might be a gang member, or her uncle’s rampant alcoholism and the codependency that runs through her family. Although the narrative is young and innocent, the story is rife with tension from day one. As an adult, I know how dark things might get for Kristine, even if she doesn’t. And yet, Kristine isn’t an idiot. She’s fearless and honest, doing her best to navigate a dangerous world.

Earthquake Weather starts shortly before Kristine’s 7th grade graduation ceremony, and the adults are worried. Two trouble makers have been murmuring about how they are going to get their revenge on the school for not letting them graduate. The kids though are more worried because it’s “earthquake weather:” what San Franciscans say when the fog lifts and reveals clear skies. Rumors abound that the disappearance of the fog is one of the first signs of the infamous California earthquakes.

Meanwhile, her cousin Jaime is named the Valedictorian and Kristine graduates with solid grades herself. The whole family is filled with pride for the two girls. Kristine and Jaime are first-generation immigrants, and their parents hope that Kristine and Jaime might get to go to college someday and live in a neighborhood safer than St. Denis. The two girls aren’t thinking very much about the future, however.

Fans of Sandra Cisneros will find Kevin Rush to cover similar themes. If Cisneros were Filipino, she’d probably end up writing something like Earthquake Weather, although the Catholic themes of redemption and the power of the Sacraments is more emphatically Catholic.

This story might be a difficult read for some, because it is written almost entirely in dialogue. Kristine’s elder family all speak a heavily accented English, and even Kristine speaks a modern slang that might be common in California, but I found difficult to understand at first. On the other hand, this vernacular did a lot to build the feel and texture of the sub-culture for me. It brings to life a part of the country that I have seen described often in mainstream fiction

If you are looking for a thought-provoking, riveting read this is the book for you. It might lead to some fruitful conversations about wisdom and good judgement with your teenagers as well. I can see this being a good book to include in a high school literature class. Non-Catholics and Protestants will get much the same reading experience as Catholics, since the Catholicism in this book is simply a part of the texture of this culture, just like the thick mist that blankets the San Francisco valley.