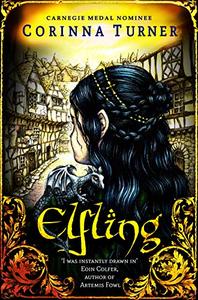 Discerning the will of God — and choosing whether to follow it — drives this historical fantasy. Elfling, by Corinna Turner, is a young adult novel set in a fantasy England with Medieval elements such as priests and sorcerers but also a race of elves, and dragonets—miniature dragons that add a charming, whimsical touch to a story that raises unusually serious moral questions. The heroine, Serapia Ravena, goes from rags to riches but also from spiritual ignorance to wisdom over the course of her character trajectory. She is a girl experiencing the changes of puberty but also a moral agent exercising responsibility for decisions whose consequences she does not always foresee. Elfling is a quest story with lots of plot twists and fast-paced action, but Serapia’s quest is a deeply personal one. The young heroine is on a desperate mission to find and keep her father, first for the sake of her own survival, and then for the sake of his. But here too the story operates on a deeper plane, focusing on the possibility of a loss worse than death, the loss of one’s soul.

The essential conflict of the story, and the element that sets it apart as a strikingly Christian narrative, is that the heroine gropes her way not only through material obstacles and human challenges but also wends through a spiritual landscape whose laws are actually more absolute than the laws of physics. The struggle between good and evil plays out between human characters and in a parallel way between elves, for whom the rules of engagement are distinctly spiritual.

Most refreshing about this story is the heroine who is attempting to do the right thing (if she can figure out what that would be) without presuming to define rightness by the standard of her own desires. Rather, she struggles to obtain what she wants while acknowledging that good and evil, right and wrong are determined by God, who has established boundaries that no creature has the right to cross. The story would be worth reading if only for the escape it provides from the asphyxiating self-referentiality that has become normal in both fact and fiction. This heroine is searching for an objective good and recognizes the tension between her own will and the will of God, a tension that in the end can only be resolved by God’s mercy. The young age of the heroine makes the story accessible to mature middle-schoolers, but the seriousness of the theological themes will give food for thought to older readers as well.

Lots of soldiers have demons, but Michael’s follow him back home. And now a secret order of demon-slayers tell him he has to save the world?!