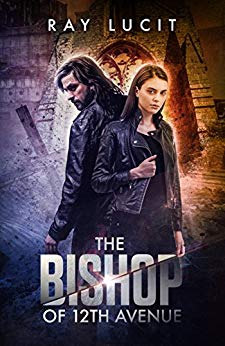 A Review by M.S. Ocampo

The Bishop of 12th Avenue is a post-apocalyptic action-adventure novel about Jake Walker. The story begins when Walker is unexpectedly given the responsibility of being the new Bishop. Unfortunately, Jake is the last person anyone wants for a bishop, as he doesn’t know anything about being Catholic, and has romantic feelings for a young woman named Becky, one of his companions in his unexpected new life.

The way that Jake becomes a bishop reminds me of the Green Lantern’s origin. This uneducated street kid becomes a bishop by chance when he witnesses the previous bishop being killed. He is given the ring of the nuncio, not knowing the importance behind the gesture. Three strangers show up and upon finding their bishop dead and Jake the apparent heir, take him to his new parish in a countryside town called Nineveh, with Jake learning about the lives the so-called “Churchers” lead.

At first, Jake is uncertain about his new role. However, he grows to love his new community, as their life is very different from the chaotic, dangerous one he had. All of the people are genuinely nice, generous, and welcoming. In a matter of weeks, he develops a desire to protect his new community from anyone who wants to cause them harm.

One of these looming threats are the Feds who are out looking for him because the open practice of religion isn’t exactly legal. After a nuclear bomb hit the city of Cleveland, people of faith fled to the country. Jake hides from the Feds in Nineveh, all the while learning about his new role. This includes dealing with a gang called the Crescent Knights who pillage Nineveh and are working with the Feds and a cult leader, to destroy the town and flush Jake out.

One aspect of his new role was learning about what exactly happened that caused the apocalypse. The imagery, as told by the pastor of Nineveh’s church, is reminiscent of Revelation, with people being marked for the sake of getting food or money. People of faith protested and, as a result, became a scapegoat for all the tragedy in the world.

Things take a turn for the worst when the Knights attack and kidnap some of the people in Nineveh. Jake starts seeing red and plans a retaliatory strike. It doesn’t go well. Jake realizes he is in way over his head and is tempted to leave his position.

The action in this book is amazing. I liked that other faiths, such as the Amish were included. There was even a whole council with Christians from other denominations. While some of the backstory was necessary, it had a tendency to drag the plot away from the present action. I love the cast of supporting characters. Jake himself is a very interesting character. In a comic book universe, he would be compared with Preacher and Constantine in the world of anti-heroes.

Overall, I highly recommend this novel to fans of sci-fi thrillers. There’s lots of action, a heartwarming story, and ends on a hopeful note, which is more than I can say for most dystopian fiction.