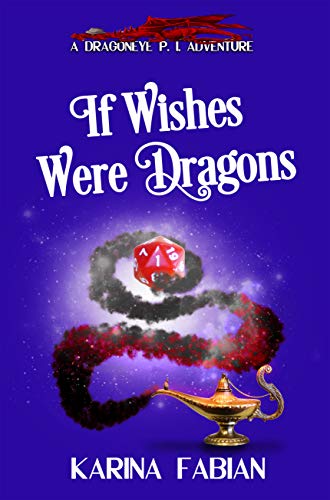 What happens when a dragon and his group of D&D enthusiast friends end up in an adventure that gives “Live Action Role Play” a whole new meaning? You have If Wishes Were Dragons.

When we meet our very un-amused dragon in this story, Vern is out of a job and longing for life in the Faerie realm. His friends, who are enjoying the local Renaissance Festival, are going down different paths in life and the group is going to break apart. All of a sudden, someone makes a wish on a magic lamp and *poof!* Vern is back to fighting Saint George…only it’s actually his friend, Father Rich, made into his paladin character.

As per usual in this series, Vern finds himself in the midst of a mystery, only this mystery is about where and when exactly everyone is. Are they in some kind of alternate dimension created from wishes and memories? Are they in the Faerie realm? And why are all the fey creatures suddenly scared of dragons, well, more scared than usual? Has something happened to Vern’s kin?

Vern and his friends search around for answers. One particular group that stands out in this story is the Summer Court of Fairies, ruled by Titania. And yes, A Midsummer Night’s Dream is heavily alluded to. In Fabian’s universe, the fay creatures were all created as morally good creatures in line with Christian theology but as each had their own personal fall from grace, the darker versions of their myths came to play. Queen Titiana and the fairies, for example, became less innocent and playful and more cruel tricksters after they played the “forbidden prank”. Dwarves became too greedy and obsessed with living underground. This does not mean that the fey creatures are all twisted and evil. Like fallen humans, they are capable of both great good and great evil. It is interesting to see how Fabian incorporates mythical creatures and magical dimensions into the Christian narrative. The effect feels much like a medieval Christian tapestry.

Fans of tabletop R.P.G. games will love the various places Vern and his friends go to: kingdoms, a labyrinth of tunnels, a thunder of dragons, and spider caves. I love that this book expands on the Faerie realm and introduces Vern’s very extended family. Vern’s time in the Mundane has changed him in ways some of his fellow dragons aren’t keen on and their differences on the role dragons play in both realms open up all sorts of possibilities for future stories.

I recommend this book for fans of The Dresden Files or The Enchanted Forest series as this book combines a very snarky protagonist with a very lighthearted, adventurous story. The exploration of the concept of Original Sin, and the spiritual power of saints, the Pope and the sacraments makes this story especially appropriate to Catholic readers.

When four boys glimpse a crime in their Colorado town they end up in an interrogation cell of the FBI.
Read More

Dying for Compassion by Barbara Golder

This is the feisty lady-doc origin story I have been waiting for. Golder proves herself to be an excellent character writer in the mystery genre.