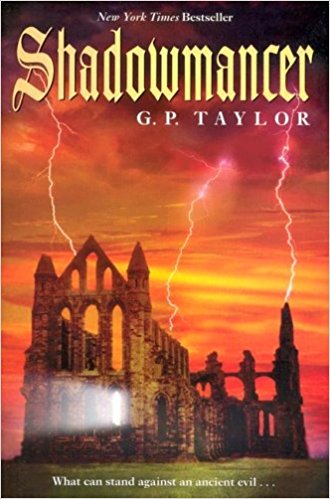 Fr. G.P. Taylor clearly wrote his dark fantasy, Shadowmancer, for young adults who love magic and fantasy, but don’t make the mistake of assuming that this young adult novel is simplistic. On the surface, it seems like this sleepy little English countryside fishing village would be the last place for an 18th century apocalypse to occur. In fact, Shadowmancer is similar to the gospel of John or the book of Revelations in its rich complexity and imagery. There are layers upon layers of metaphor and subtext as shown in this passage:

A Dark Fantasy along the lines of Revelation itself.

The sky grew darker and darker and the full moon was blotted out by thick black cloud as streaks of lightning flashed from sky to sea, exploding in the water. A lightning sword hit the ship. The mainsail cracked, then crashed to the deck, sending startled crewmen bolting from their hammocks.

As they rushed on deck, another sail crashed down, splitting the deck in half and sending shafts of splintered wood into the air. The ship lifted and dropped with each wave; a crewman was thrown through the air and into the cold sea, never to be seen again.

“A direct hit,” shouted Demurral, laughing and rubbing his hands together in glee at the sight. “One more strike and the Keruvim will be mine.”

He raised the statue into the air and chanted more magic. “Wind, hail, lightning, thunder and wave.” The sea rose at his command, each surge growing higher and higher. Breakers like black fists smashed against the ship, almost engulfing the vessel.

Two local villagers, Thomas Barrick and Kate Coglan join up with a mysterious African man named Raphah to stop the main villain, Vicar Obadiah Demurral, from destroying the world. Demurral rules over the local villages with an iron fist, but the power he lords over the villages isn’t enough for him. He dabbles in dark magic that gives him the power to raise the dead, creating creatures called the Glashan, and steals the Keruvim (the MacGuffin of the story) with the hopes of using it and its other half in a ritual that will bring on the apocalypse.

Thomas starts out as your typical village street urchin. With his father dead and his mother in the hospital, he calls the vicar out on his hypocrisy and greed, lamenting his own poor status. He gets pulled into the action when Raphah rescues him from drowning. Although he is uncertain, Thomas is resolved to help Raphah on the mission to get the Keruvim back from Demurral. A young village girl, Kate Coglan gets thrown into the adventure when she tries to kill a Glashan, a zombie that Demurral raises from the dead, using the power of the gold Keruvim.

Raphah, the mysterious African from Cush, arrives in this small English countryside village to get the Keruvim back to his people. He’s the oldest of the trio and helps exposit important information regarding the dark magic and otherworldly creatures shown in this story. Prejudices towards Africans are prominent and he even gets branded as a slave, but his determination to do God’s will makes him a compelling character.

Dreams and apparitions play a big role in helping the heroes along their journey. One such character is the archangel Raphael who takes on the form of a man named Abram.Rickards. Of course, the other side of the spiritual warfare coin is at play as well. The devil, called Pyratheon, appears in this story in his most deceptively charming form: a tall figure with bright red hair, dressed in armored leather, who speaks in a warm, tender voice; our “knight in shining armor.”

I will state outright that this book is not for everyone. People who are pagan or Wiccan won’t like this book as it portrays their actions in a dark light. I also want to warn readers who prefer strong, female characters to proceed with caution, as Kate, the only prominent female character, gets the least amount of development in this story, and is shown to be a coward underneath her tough exterior. The story is told in an omniscient viewpoint, which can be initially confusing.

What makes Shadowmancer compelling to read is the attention to detail and the overall atmosphere. The fact that whenever I open this book, I find some new detail I missed, another piece of the puzzle that adds depth and entices me to read the book again in search for more. Most of all, I love why this book was written. In an interview with Christianity Today, GP Taylor said:

“I was out there talking to a church group about the threads, the dark and sinister threads through children’s literature. At the end of one of these nights, this woman came up to me and said, I think you should write a children’s book, but have the main theme of a God who’s triumphant. On the way home this stuck with me.”

Shadowmancer is a complicated, challenging read that fantasy fans will definitely find intriguing because of its dark atmosphere, threatening villain, and the timeless storyline of three unlikely heroes who, despite overwhelming odds, help to defeat the dark forces that were bent on destroying their world.

Author’s worldview: Catholic, though at the time this book was written he was an Anglican Priest. He has since converted.