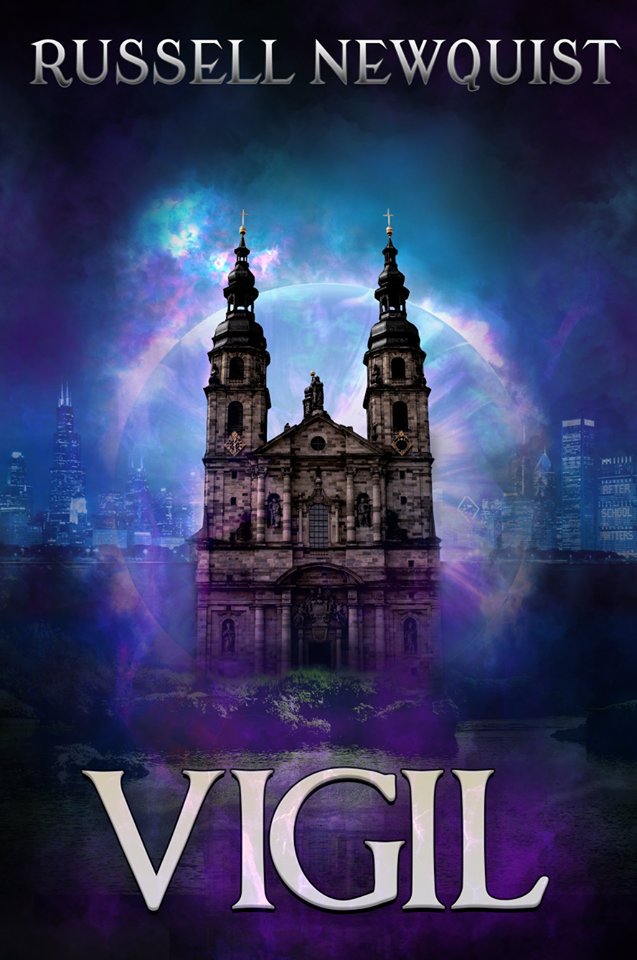 “Save the priests, kill the dragon, and get the girl.”

“I can get behind that.”

Imagine if the 80’s cult classic Big Trouble in Little China was actually Big Trouble under an ancient French Cathedral, and based off of Christianity rather than Chinese Buddhism. Then stop imagining it and pick up this book because it is exactly as hilarious as it sounds.

Vigil is the second of Newquist’s books following War Demons, but having not read the first book, I found the second to be easily understood as a stand-alone novel with only minor spoilers for the first. I gather there was a similarly rousing adventure in the first involving an evil sorceress and origin story for Peter Bishop and his sword of St. Michael but Newquist fills you in on the necessary details quickly.

There’s a dragon, a captured girl named Faith, and a motley band out to save her, led by Peter Bishop. They track the dragon to a cavern below a medieval French Church and hatch a plan. Peter will distract the dragon below the church. Above ground, his friends hold off the great demon’s hordes from entering the Church while the priest says Easter Vigil Mass to spiritually imprison the demon below hallowed ground. It brings a new meaning to Pope Leo’s rumored vision of the devil prowling just outside the Church, waiting to devour souls.

Although I was at first a tad worried that the damsel-in-distress scenes were going to be painful, I was pleasantly surprised. Faith isn’t the manly sword-wielding woman stereotype of today, but she’s not useless either. She acts with courage and honestly does handle her situation pretty well. Granted, Peter still has to rescue her but who can blame a girl when she’s been holding off a man-eating dragon by herself for months? In fact, you could see it as actually breaking down the damsel in distress stereotype because there is real distress. This dynamic also feeds into the analogy of the whole Easter setting of the story; the bride/church is indeed in need of rescue beyond her ability & requires a conversion to humility. And while she isn’t crazy strong, the story doesn’t belittle her for it. There is also a nice character arc with her as her difficult experiences change her from a rather shallow party girl to a courageous and grounded person.

I enjoyed how many tropes Vigil breaks. For one thing, Peter isn’t rushing to save Faith because they are dating. He’s actually doing it for the quite understandable motivation of she is a human being who was captured by a giant flying demon. I mean, what did you expect him to do? Just walk by? Also, while he does perform some pretty outstanding feats as he makes it through the various dungeon traps, all his exertion has the added effect of encouraging his friends to walk a few paces behind him as he begins to stink. Adventure stories too often forget that unseemly aspect of human anatomy.

Vigil is a short novel that starts off in the midst of an epic dragon hunt and then doesn’t let up until the very satisfying, if campy, ending. It’s fast-paced, fun, very quotable and a great read for any fantasy adventure or RPG fan. I think girls will love it as well, but if you’ve got any young boys who have a hard time finding books they like, this is sure to capture their attention. There are one or two silly jokes about sex, and at one point, the heroes have to venture into a brothel to hunt down someone for information, but nothing is gratuitously described and, while the heroes have a hard time not staring they avoid temptation.

Secular & Protestant readers alike will enjoy a fun dungeon romp that just happens to be inspired by Christian beliefs about angels and demons. I can only see a Protestant reader disliking this if they have a strict rule against any references to the Catholic Mass in their library. Honestly, it’s about as preachy as The Big Lebowski (and just as funny).