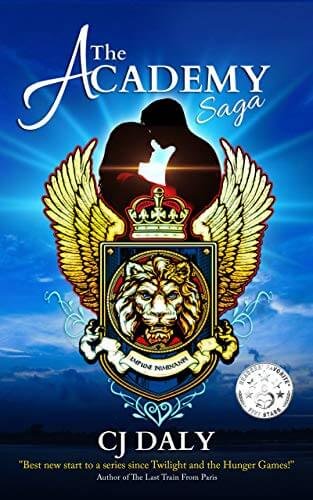 The Academy Saga is a suspenseful contemporary romance. In the small town of Clovis, New Mexico, Katie Connelley is just trying to get by. She balances going to school, taking care of her family farm, and waiting tables at a diner on the weekends. Her younger brother, Andrew is being scouted by the Elite International Academy (EIA). Cadet Pete Davenport has been assigned to mentor him. However, as charming as Cadet Davenport is, and as prestigious as the Academy seems to be, there’s something Katie feels suspicious about. The last thing that Katie wants is to let her younger brother be in the care of strangers. The problem is that she’s not sure if her intuition is right, or if she’s being paranoid like her mother, who passed away.

Cadet Pete Davenport is a very attractive frenemy who falls for Katie’s girl-next-door style. Although the novel is mostly in Katie’s point-of-view, there are some scenes from Pete’s perspective. There’s definitely some truth to Katie’s fears in regards to the EIA, but it’s not certain as to what the Academy’s purpose is. Their business is to recruit the best and brightest, kids with special abilities, and place them in positions of prominence (almost like a junior level CIA).

While this novel is a great suspenseful read, there are some issues that might make readers uncomfortable. Katie’s father is verbally abusive and frequently absent from the story. There are also instances of gaslighting, as Pete is actively making sure that Katie doesn’t interfere with the Academy’s agenda. One other minor nitpick is that I find it hard to believe that Katie, who refuses to say the Lord’s name in vain, would willingly listen to gangsta rap.

Overall, this novel does a great job of telling a suspenseful, thrilling story that’s hard to put down. On top of that, the romance between Katie and Pete is very believable, with a lot of chemistry and tension. I would recommend this novel to fans of James Patterson’s novels or One of Us Is Lying. It’s a great read for a general audience, as there aren’t any overt Catholic themes aside from Katie’s own faith and adherence to a modest lifestyle.

A great romantic drama about how authentic love can restore life to two people who have been hurt in the past.