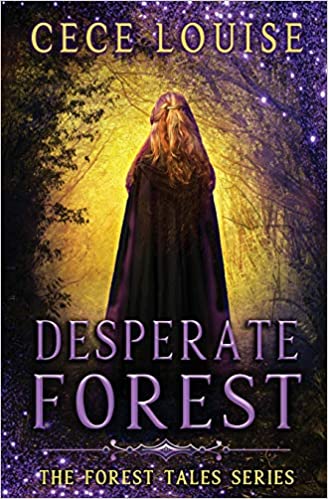 Princess Roselynn of Tover is on the run from her own kingdom. After the death of her father, her uncle usurps the throne and plans on killing her. Roselynn’s only hope is to flee and to find her betrothed, Prince Darius, who is about to become king of his own land, Marsnovia. In order to get to Marsnovia, however, she has to navigate her way through the Eternity Forest, a vast expanse of woods where people often go missing. As Roselynn said: “If you didn’t know where you were going, you could wander in it forever and never find your way out.”

A few days into her venture, Roselynn is rendered unconscious from the shock of an electric eel that strikes her while she is bathing in a river. She’s rescued by a large group of wanderers, but they aren’t exactly trusting of her. While Gavin, the leader of the group, is a noble, honorable man, the second-in-command, Jay, interrogates Roselynn. After she reluctantly tells the two men of her problem, Gavin plans on taking Roselynn to the nearby kingdom of Galesmore. There are rumors that Marsnovia is going to war, and the two men are afraid to help her head that direction, even though Roselynn insists that Darius is only starting a war to defend against her uncle.

Princess Roselynn learns from this group of “outlaws” how to survive out in the forest and even picks up some swordfighting from Jay. In spite of her love for the Crown Prince Darius, Roselynn finds herself attracted to Jay, and it’s clear that he’s also developing feelings for her. Unfortunately, Roselynn knows that Jay is hiding something. It’s not until Roselynn gets discovered by Marsnovian knights and taken to her fiancé’s kingdom that she finally begins to discover the truth about Darius and Jay and what happened to Darius’s father. Ultimately, she will have to save Jay from execution and confront her uncle in order to restore peace and take her rightful place as queen.

I love a good slow burn romance and the relationship between Roselynn and Jay is a great example of it. Even though they initially dislike each other despite their physical attraction, the relationship is founded on them working together and seeing each other as their authentic selves.

At one point in the novel, Roselynn compares and contrasts her two relationships. Roselynn’s relationship with Darius is described as being a Prince Charming who came to Roselynn in her hour of need. Spoilers ahead, highlight words to see them: [ but his interest in her was purely for mercenary gain. When Darius reveals his true nature, Roselynn realizes that she was infatuated over a façade and not the real Prince.]

Jay and Roselynn’s relationship, on the other hand, initially has this back and forth swing between antagonism and attraction and they actually complement each other in terms of intelligence and personality. Underneath Jay’s skeptical bravado, he’s selfless and his love for Roselynn is genuine. In turn, Roselynn learns to that a real love is built on time spent together in reality instead of a couple of sweeping grand gestures.

I recommend this book for young adults, especially ones who are fans of Gail Carson Levine’s books (Ella Enchanted) as well as The Princess Bride and Enchanted. The author’s Catholic faith isn’t really shown in the book, so Protestants and people from other faiths can easily read this book and have a good time. Readers who don’t consider themselves fans of fantasy can also find this book a lighthearted, easy read, as the world building is quite simple, similar to a fairy tale.