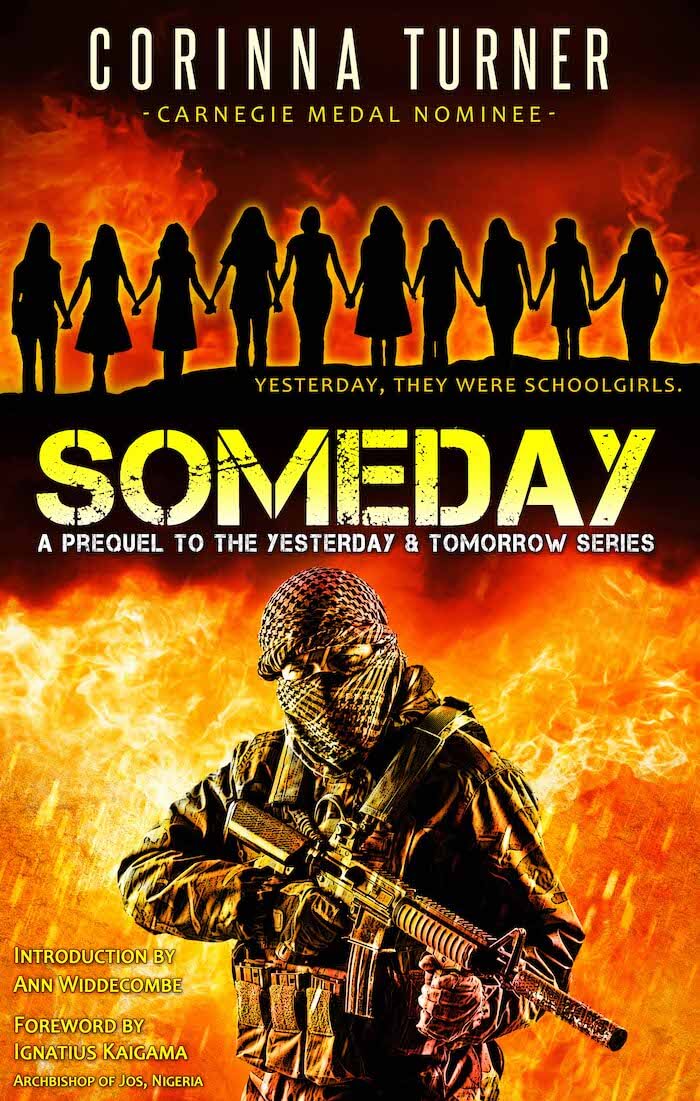 It’s the night before exams at Chisbrook Hall girls boarding school, in England. When 16-year-old Ruth and her friends are awoken by an alarm, they think it’s a fire drill—until strange men barge into the building, force them outside at gunpoint, and load them into horse trailers. Overnight, the schoolgirls are plunged into a nightmare: kidnapping at the hands of Islamic extremists. They face not only the horrors of physical and sexual abuse, but also a spiritual crisis. If the girls do not accept the creed of their Muslim kidnappers, they will be killed.

This is the premise of Corinna Turner’s heart-wrenching novella, Someday, inspired by the true story of the recent Boko Haram kidnappings in Nigeria. In 2014, Muslim militants kidnapped 276 girls—many of them Christians—from the town of Chibok. Some were sold into forced marriages, while others escaped to tell the world about the torture and rape they had endured. Shocked, countries around the world pledged their support—but as the months dragged on, the missing girls, like any other headline, were quickly forgotten.

Buy the book on other online stores

Corinna Turner writes her book in a conscious attempt to remind Westerners of the plight of the Chibok girls, and of the many persecuted Christians around the world. In order to bring the terrible events home, Turner sets the kidnapping not in Nigeria but in the UK. This makes the characters more recognizable and relatable to readers in First World countries. It also sets up an important question: what does the ordinary person do when confronted with radical persecution?

The novella explores this question from a variety of religious viewpoints. Ruth, the main character, is a Catholic, and is determined to hold on to her faith. Her best friend, an atheist, desperately tries to persuade Ruth to renounce Christianity—anything is better than dying. Other girls come from Protestant backgrounds, and one character practices Japanese Shintoism. Another is actually a Muslim herself, but the extremists treat her little better than the others, revealing the stark divide between the radical and moderate sects of Islam.

While the book is clearly written from a Christian standpoint, Turner provides a wonderfully sympathetic view of peaceful Muslims living in the West. One of the subplots follows two British military cadets, twin brothers from a devout Muslim family, who are assisting in the search for the kidnapped girls. The cadets are heartbroken that some men use belief in Allah as an excuse to mistreat women so horribly. Even as they devote themselves to finding the schoolgirls, they meet with fear and prejudice on account of their race and religion. Through these characters, Turner creates a relatable portrait of ordinary people who believe in Islam, but who also condemn the violent actions of extremists.

Turner’s writing is gripping; her choice of a first-person narrative makes the peril immediate. However, I occasionally found the action difficult to follow. Throughout the novel, Turner switches between the viewpoints of more than a dozen different characters; the sheer number of narrators sometimes makes the plot feel disjointed. And while the wide range of viewpoints is impressive, it means that the development of individual characters remains fairly limited. Nevertheless, the story’s structure serves its primary purpose, which is to create a multifaceted view of a single horrifying event.

Just as many of the kidnapped Nigerian girls are still missing, Turner leaves the ultimate fate of her characters uncertain. It is not always an easy narrative to read. Turner includes both violence and sexual abuse in this story, though she avoids depicting it in graphic detail. Due to these elements, parents may want to consider giving this book only to their older teenagers.

Nevertheless, the book’s intense themes make it all the more important, especially for readers in countries that are “safe” from violent persecution. Most people living in developed countries do not truly appreciate the hardships endured by persecuted Christians. Turner brings this harsh reality to life in her story. Martyrdom is not a thing of the past. As secular world governments become increasingly hostile towards the Church, it is all the more crucial that Christians understand the true demands of their beliefs. Someday provides an unflinching, contemporary view of the sacrifices that real Christians are making for God and for their faith.