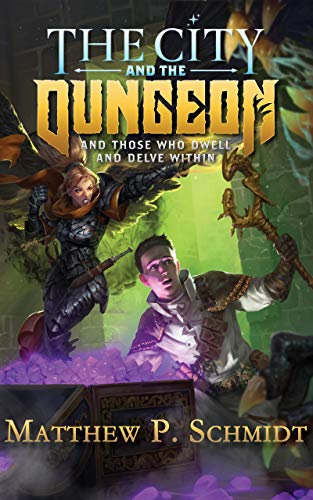 LitRPG is a relatively new subgenre of speculative fiction where the heroes interact within a world that mirrors common videogame tropes and mechanics. Ready Player One by Ernest Cline was the breakout star of this genre, but it only scratches the surface of the diversity of stories present in this niche. The City and the Dungeon is a covert Catholic book that is an excellent introduction to the genre for newcomers and a welcome relief to die-hard fans for its willingness to take on the theological implications of the world.

Alex Kinderman needs money. Born in the ruins of a world wrecked by war, he knows one desperate way to get quick employment—killing monsters in the mysterious Dungeon that has appeared on planet Earth. To even have a chance at surviving the Dungeon, he must touch the Cornerstone—an object that renders him immortal as long as he gets a regular diet of crystal from the Dungeon. Any extra crystal he finds he can use to support his mother and sister back home.

“The City. No need of any other name. Had any existed when it was only a camp of brave souls, it was lost in its present grandeur. Those who lived there needn’t care for any other city, or anywhere else at all. I decided I would be different.”

-The City and The Dungeon by Mathew Schmidt

For unknown reasons, the Dungeon operates according to rules that are uncannily similar to the role-playing game Dungeons and Dragons (though it is unclear whether the 1980’s tabletop game ever existed in this version of Earth). To survive, Alex joins forces with a team of other Dungeon Delvers and embarks on a path that will lead him deeper his world’s mysteries. As this is the first book in a series, the ending left me with many questions, but the main character arc did come to a satisfying conclusion. I can see why so many fans of this story are clamoring to read the sequel. The City and the Dungeon oozes mystery and is filled with fascinating characters, each with their own secrets. One of my favorite characters is Elise Purple, the party’s rogue. From the start it is clear that she knows far more about the Dungeon and its City than a regular beginner, and though she displays the cynicism so commonly associated with rogues, she is one of the book’s most stalwart defenders of the idea that faith and reason are compatible.

As far as philosophy goes, this book is very covert in its Catholicity. If you’ve been reading Catholic literature regularly, you might even miss the hidden themes and not realize how unique this story is in its genre. As it is the first in a series, it is difficult to draw hard conclusions. But since most books in the Science Fiction and LitRPG genres are openly hostile to religion, it was gratifying to read a story in which religious practice is taken seriously and the religious people are not just well-meaning idiots. Unfortunately, in today’s scifi and LitRPG climate, it is far more common to see a premise like this [the appearance of an unexplainable monster-filled Dungeon] used as an excuse say, “Well, that proves God doesn’t exist!” Instead Schmidt makes the claim that, in fact, the presence of such a miracle would generate a myriad of new religious and philosophic questions. I appreciated reading a story where the characters reflected a diversity of beliefs while having relationships based around mutual respect and friendship. Alex himself grows from a lukewarm agnosticism to a real appreciation that there is some greater intelligence governing the world—that not everything can be attributed to a chance roll of the dice.