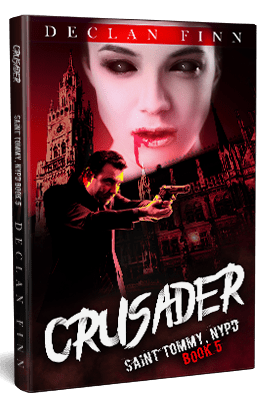 When last we left Detective Tommy Nolan the living saint, he and Father Pearson had just stopped a plot to an ancient preternatural artifact known as the Soul Stone to destroy London. At the end of that book, City of Shadows, Nolan had a visit from an old enemy, Bokor Baracus (former Deputy Mayor of New York and twice-dead necromancer) who provided a tip on some nefarious activity going on in Berlin.

Now, recovered from his injuries and enjoying time with his newborn daughter, Grace, the detective is called upon to follow up on recent intelligence about what Baracus was hinting at and smite some evil.

For this adventure, Nolan’s toolbox is expanded beyond what we’ve seen before. Already exhibiting the charisms of bi-location, smelling evil, healing and levitation, Nolan can now when need be speak in tongues and even raise the dead. More disconcerting to Nolan, though, is when his point of contact in the Vatican presents him with a new ring, a ring that contains a piece of the Soul Stone. Nolan is taken aback, since he knows it only as an artifact that channels and redirects evil. It turns out that it can also be charged by holiness and virtue, which is made possible after he and Father Pearson had successfully purged it by dousing it in holy water for hours and having an exorcist pray over it.

Finn does a slightly slower run up to the action than usual, going back and forth between Nolan and a pair of girls, Adara and Lena, who have been abducted. The two storylines intersect at a nightclub in Munich. The nightclub attracted the interest of the detective and Father Pearson because people—including members of the local police—had a tendency to go in and never come out again.

Naturally, the nightclub is worse than they thought it would be. With the noise and the lighting, it’s set up perfectly for abducting people without anyone noticing. And then there are the orgies upstairs. It’s here that Detective Nolan confronts the club’s owner, Jayden, who is also the one responsible for abducting the two girls. Nor is Jayden merely an evil woman: she’s a succubus who feeds off the energy in the club. Nolan isn’t completely caught off guard, though. In between adventures, Father Pearson and some others at the Vatican equipped him with an array of new weapons including holy water atomizers, Mass cards, packs of holy salt, and holy oil. The holy oil comes in handy later when he crushes the packets against his knuckles so he can literally punch demons in the face.

The trail leads from Munich to Poland, and then to Berlin. Nolan learns along the way that the sex trafficking network he’s destroying was funded by Newby Fowler and Polly Toynbee and run by Imam Kozbar, the villains who met their end in City of Shadows. Kozbar was the real brains behind the operation, organizing it all into a collective sacrifice intended to raise the demon Asmodeus.

Nolan has fortunately made new allies along the way, including the German Kommissar Berger, a host of Polish Commandos armed with paintball guns that shoot balls full of holy water, and a rabbi who provides him with an army that you’ll have to read to find out about.

Fans of Finn’s work might recognize Asmodeus from the Love at First Bite series. It’s unclear if Detective Nolan will meet Marco (the hero of that series) at all, but the fact that Asmodeus prefers to be called ‘Mr. Day’ does place both stories squarely in the same universe.

Book 5 of the Saint Tommy series is another wild ride in which Finn expands his lore in truly unexpected ways. In terms of mature content, Crusader isn’t excessively graphic, but it’s enough that younger readers should wait a couple years. Late teen and above will have a very good time indeed.