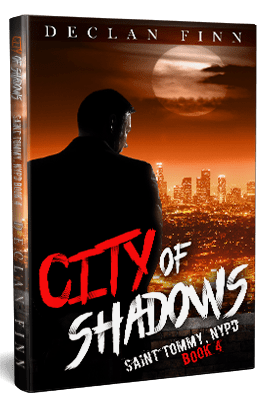 City of Shadows is the fourth book in Declan Finn’s St. Tommy NYPD series. For those just catching up, Thomas Nolan is a detective in the NYPD, married, with one teenage son and another little one on the way. He is also a wonder worker, or more colloquially, a living saint. The most obvious evidence of this is the various charisms that God has granted him. Detective Nolan can smell evil, bi-locate, levitate, and heal rapidly if the need arises.

These charisms have helped him put down a prison riot, fight a possessed abortionist, take down hordes of zombies, vampires, and a warlock. After the events of Infernal Affairs, in which the warlock in question (who happened to be the mayor) was literally dragged to Hell, Nolan transferred to the NYPD’s international intelligence division. Thanks to some behind-the-scenes dealing, the saintly detective was essentially placed on loan to the Vatican.

Almost immediately upon arrival, Nolan is sent to London to investigate the theft of an artifact known as the Soul Stone. In London, Detective Nolan meets his new partner, Father Pearson, a ‘combat exorcist’ who also knows more than a little about archeology. The Soul Stone is of particular interest as it is rumored to be a mystical artifact, given by Anubis, and essentially is powered by evil. That power can then be used to level a city. Normally, even Detective Nolan (who has seen more than his share of strange artifacts) would be skeptical, but the Stone’s theft coincides with a rise in horrifying nightmares experienced by a number of spiritually sensitive people in London. Couple that with the massive stench of evil that he detects from 20,000 feet above the city, and Nolan figures there is cause for concern.

Finn shifts into his trademark high-octane action-driven storytelling early on. On the way to the museum where the Soul Stone was stolen, Nolan and Pearson stop a kidnapping and acid attack in progress. Shortly after, the museum’s security footage leads the pair to a mosque run by Iman Kozbar. From there, things quickly spiral into chaos as Nolan tries to prevent Kozbar and his partners Newby Fowler and Poly Toynbee from charging the Soul Stone with as much sin and suffering as possible.

Fowler, Toynbee and Kozbar make an interesting team as Fowler and Toynbee are committed atheists who believe the Soul Stone is an alien technology, and Kozbar is a jihadi interested in destroying Western civilization. The only thing that unites them is their mutual hatred of Christianity. It’s that mutual hatred that makes them willing to work together to essentially offer London as a sacrifice to demon they are trying to raise. If you think it strange that atheists are raising a demon, it is. Of course, they think the demons are nonsense. However, they’re convinced they are opening a portal for an alien to come through.

Nolan manages to stop the plot of course, burning down much of the bad guys’ network in London along the way—not without help, though. After fighting their way through innumerable henchmen and reclaiming the Soul Stone, Detective Nolan and Father Pearson spend the night trying to destroy it. As they realize that doing so might be impossible, Kozbar and a small army show up, demanding the Stone’s return. Naturally, Nolan refuses and offers up a prayer to the archangels, resulting in some unexpected but very welcome aid.

Finn sets up the next book with a cameo from Bokor Baracus, the Voodoo necromancer and Deputy Mayor of New York that Nolan had watched die twice already. Strangely, Baracus isn’t there to fight. He’s there to offer a lead, one that will send Detective Nolan driving across Europe in Book Five: Crusader.

As always, Finn’s work and themes are for a more mature audience and occasionally the language is rough around the edges. Detective Nolan, though, provides an excellent example of courage and humility in extreme circumstances, making this a solid read for fans of action driven horror late teen and up.