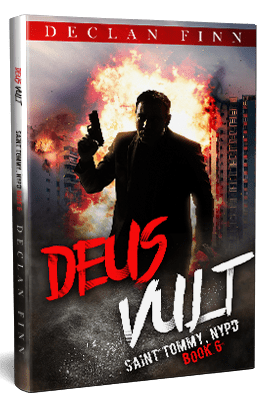 Detective Thomas Nolan, NYPD has fought gangs, socialist activist groups, a possessed abortionist, vampires, zombies, a death cult, dirty cops, succubi, jihadists, and more over the course of the last five books. He’s been aided by his partner, Alex Packard; Father Pearson combat exorcist; his wife Mariel; a ring made from an antediluvian artifact called the Soul Stone; and most recently a suit of armor made from the left over parts of destroyed golems; and of course his considerable supply of saintly charisms. If that introduction confuses you, I recommend going back and reading my reviews of the previous St. Tommy books. Or, just take my word for it and go read Declan Finn’s whole series. You’ll be glad you did.

After all of that work, the good and saintly detective is enjoying some well-deserved rest back home with his family. Unfortunately, things never stay quiet for long for Detective Thomas Nolan. While he is at dinner with his family – including his newborn daughter, Father Pearson shows up, with a mission right in their own backyard.

In classic Finn fashion, the action kicks in almost immediately from there as Nolan has to rely on the help of his priest, his partner and his family to take on the true power that he has been fighting against throughout the entire series. The cult that has been using human sacrifice, sex trafficking, drugs, terrorism and every other means available to build enough power has reached its endgame, despite the many setback they’ve suffered at the hands of Detective Nolan and his allies.

To prevent the cult from achieving its final goal of raising a major demon, Nolan has to rely not just on brute force but his detective skills to learn where and when the summoning is to take place. Along the way, he has to fight his way through hordes of gunmen and monstrosities that come straight from a Lovecraft story. The detective also gets some unexpected help from an old enemy in the person of Bokor Baracus. Given their history (Baracus has tried to kill Nolan a few times) there are some trust issues but the necromancer manages to convince Nolan that he’s not eager to see Hell actually win. Baracus is a mercenary and if either side wins, he loses.

Finn does an excellent job of keeping the plot moving and setting up Nolan and his allies for their greatest battle yet. They are all strained to the breaking point but in the end, it’s only Nolan’s trust in God and love for his friends that truly wins the day in a battle lifted from the pages of Revelation.

For those who have been reading Declan Finn’s St. Tommy books, this makes a truly epic conclusion to the story arc begun in book one. If you are already a fan, you will not be disappointed. If you aren’t, go back and read Hell Spawn, the first book in the series.

As usual, given the themes and imagery at work, I wouldn’t put this in the hands of younger readers but I can strongly recommend it for late teen and up.