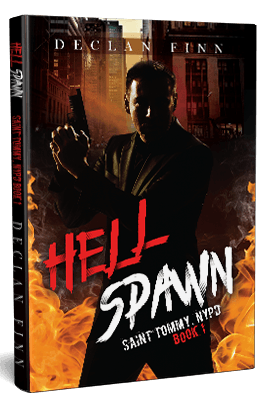 Detective Tommy Nolan is a saint in the making. Saints typically don’t have it easy in this world. For most people, being a homicide detective in New York City would be more than enough. For Detective Nolan, things are about to get much worse than that.

Tommy of course doesn’t realize at first that he is a saint. He doesn’t even suspect it when he suddenly appears in front of a purse snatcher he was chasing. One moment he was running behind the criminal, the next he was front, delivering a clothesline to end the chase. Even for an NYPD detective, that would normally be the strangest and most disturbing thing that would happen that day. For Tommy, it was neither.

Back at the station, Nolan catches an unusually foul scent, a scent only he seems to notice. Things get even stranger when he tracks it to a junkie waiting to be processed. The junkie’s reaction to Tommy’s presence is when things really get interesting. With no warning, he breaks his handcuffs and starts a brawl that leaves several officers wounded and the station severely damaged.

After a grueling day of cleanup, paperwork, and a visit from Internal Affairs, Nolan thinks that he can go back to relaxing evening with his wife and son. His hopes are dashed though when he gets called away to a murder close to his home.

What he finds is a young girl brutally and ritualistically murdered, a girl we later find out is a friend of his son. Nolan also finds a taunting note, “Come and get me, Patron Saint of Detectives.”

Not sure what to make of this, Nolan brings it all to Father Richard Freeman, a Dominican who works with the police as a counselor. After hearing the detective’s description of events, including a restless night of strange and disturbing events in his house that only stopped when he prayed the rosary, Fr. Freeman suggests something that takes the detective off guard, Tommy might be a saint in the making. Not only that, his murderer may well be someone possessed by a demon.

Explore all of Declan Finn’s Books on Catholic Reads Here

Lest the reader be as skeptical as Tommy is, the author does more than demonstrate that Nolan is an excellent detective. Finn gives the reader a full portrayal of a man deeply involved with his family and life in his parish. They participate in nearly every event at the parish and Nolan himself delivers Communion to the sick. Even his police work is infused with his Catholic philosophy, continuing to bring in lower criminals than most detectives would bother with, even on his off hours. Yet, he treats the criminals he catches with respect and mercy, often conversing with them on a first name basis.

We get further evidence of Tommy’s sanctity throughout, such as his frequent recourse to prayer, prayer that even seems to play a role in miraculously guiding his bullets, the apparent plethora of blessed rosaries around the house, and his mastery of the gift of bilocation at the book’s climax.

The demon, of course, recognizes all of this and sets about targeting Tommy, hoping to break him. At first, it seems like its motivation is simply to have the satisfaction of tearing down a saint. As we near the conclusion though, the demon lets slip that he’s actually removing a threat, a threat to a larger and still unknown plan.

Those familiar with Finn’s Love at First Bite series will definitely appreciate the author’s emphasis on action, his bold portrayal of in the trenches Catholicism, and hints of a much larger plot at work, hooking the reader into the next installment. I know I’ll be jumping into the next one soon as my plate clears enough.