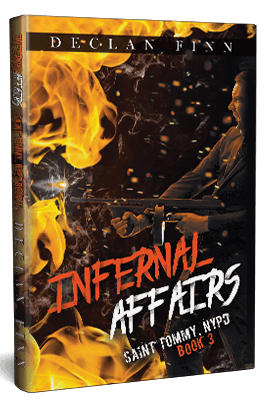 Declan Finn is one of the most prolific and reliably entertaining authors I’ve ever had the pleasure of reading. Infernal Affairs, the third book in his series about the trials and tribulations of the saintly Detective Thomas Nolan, is no exception.

Buy the Paperback for $14.99 (or 4 credits with Silver Empire Bookclub)

Buy the Hardcover for $29.99 (or 9 credits with Silver Empire Bookclub)

Subscribe to Catholic Reads to Get Weekly Catholic Books $1 to FREE!

The story picks up several months after Death Cult, in which Detective Nolan went to war with a cult of Moloch worshipers (operating behind the front of the Women’s Health Corp) who had kidnapped his son. In the interim, things had been relatively uneventful. The good detective was even beginning to hope that he might be able to just focus on being a husband, father, and cop again. That illusion of course is shattered on the first page when someone attempts to assassinate him during Mass. It is just the first of multiple attempts on Nolan’s life thanks to a $10 million bounty on his head. Throughout the next two days, Detective Nolan and his partner Alex Packard fight off corrupt cops, standard gang-bangers, Anti-Fa members, a supernaturally upgraded MS-13 leader, zombies, vampires, a necromancer, magically enhanced drones, and an actual warlock.

How do they manage to survive all of this? If you’ve read the previous books, you already know. For those just coming on board, Detective Nolan is a living saint. As such, he has been granted access to the various abilities attributed to saints over the centuries. These include levitation, bi-location, the ability to smell evil, and certain supernatural creatures don’t react well to his presence. Vampires literally burst into flames if he holds onto them too long.

Naturally, these saintly charisms don’t work like superpowers; Nolan can’t just levitate whenever he finds it convenient. Rather, even in the midst of battle, he maintains near constant prayer, often praying various parts of Scripture related to his need at the moment. So far, God has been answering.

Unfortunately for Detective Nolan, even though he emerged victorious from the battle with the warlock, who has been behind not just the events of this book but the whole series thus far, there has been enough damage done that he has to leave his beloved New York. In addition to the bounty (now upped to $20 million) still being active, the number of corrupt cops and public officials he was forced to kill and the amount of property damage done has made his situation untenable. On the plus side, the NYPD has an international intelligence division, which he is transferred to after some prompting from an FBI agent (who readers of Finn’s Love at First Bite series might be familiar with) and Fr. Freeman, a psychologist for the NYPD. The book ends with a tease about what is to come next for Detective Nolan as Fr. Freeman informs him that certain people in Rome would like very much to meet the battered policeman.

Subscribe to Catholic Reads to Get Weekly Catholic Books $1 to FREE!

Infernal Affairs is another whirlwind ride from Finn that shows yet again that a Catholic novel can be fun, exciting, dark, and faithful to the Church all at the same time. It can be strongly recommended for mature teens and up.