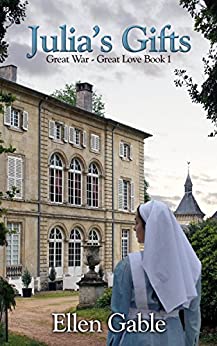 Julia Murphy, originally from Philadelphia, is a young woman who volunteers to help take care of injured soldiers in France. In December of 1918, she purchases a silver pocket watch and has it engraved for her “beloved,” even though she has no idea who her beloved is. She has high expectations of what she wants her husband to be and expects to fall in love at first sight with her soul mate.

Initially, Julia finds the idea of volunteering as a medical aide in the army barracks exciting, pondering the romantic idea of taking care of soldiers in need and possibly falling in love with one of them. A sheltered young woman, the reality of ward hits Julia hard. As soon as she gets to the field hospital, she has to treat hundreds of injured soldiers right away.

Major Peter Winslow is an intelligence officer of the 38th Battalion of the Canadian Expeditionary Forces. He joined up as part of an allied group between the Canadians, Australians, and British. Most of his work entails translating French and German messages and relaying that information to Allied forces. He also has the grim job of interrogating prisoners of war. Winslow deeply misses his family, especially his brother, John, who was killed in the line of duty. He starts out the novel questioning why God did not answer his prayers for his brother’s safety. By the end of the book, he learns about his brother’s heroic sacrifice and sees God’s providential hand, using Julia’s love to protect him in dire circumstances.

When Julia and Peter meet for the first time, it’s anything but love at first sight. When Major Winslow finds Julia tending to an enemy soldier, he treats her harshly. Their relationship starts to change when Peter gets two pairs of socks that Julia knitted, the socks she intended for her beloved. Although she is very irritated that Peter got her socks instead of a soldier she assumed would be more in need of them, he compliments her on her knitting skills. Major Winslow starts falling in love with Julia, but it takes her a lot longer for her to return his feelings.

The camaraderie Julia has with her fellow volunteer nurses Charlotte and Ann is more told than shown, but they all genuinely care for Julia. Ann and Charlotte take care of Julia while she’s sick with influenza.

War stories are often written with a very sanitized tone, especially when there’s a love story, but Julia’s Gifts doesn’t hold back on how harsh, chaotic, and traumatizing wartime actually is. There’s mention of lice, people affected by mustard gas, various injuries, and influenza. This contrast is best shown when Julia gets a letter from her family, which mentions how her younger brothers were more than eager to enlist as soon as they got old enough, and Julia laments how little they really know.

I recommend this book for fans of wartime stories, especially World War I. The romance is appealing for those who like slow-burn relationships and hate-to-love stories. The author’s Catholic faith is shown as part of Julia’s own faith and Divine providence is a major theme as Major Winslow navigates through the chaotic war.

Daughter of Light, by Corwyn Alvarez

A Greek princess from a tiny island kingdom becomes one of the early Church’s most famous martyrs.

What if you were Jesus’ protective older brother? Could you navigate the courts of Rome & Jerusalem to save him?

Bereft of a mother & betrayed by his twin, Jarret fights for a place to call home, unaware a supernatural war threatening to damn him to hell itself.