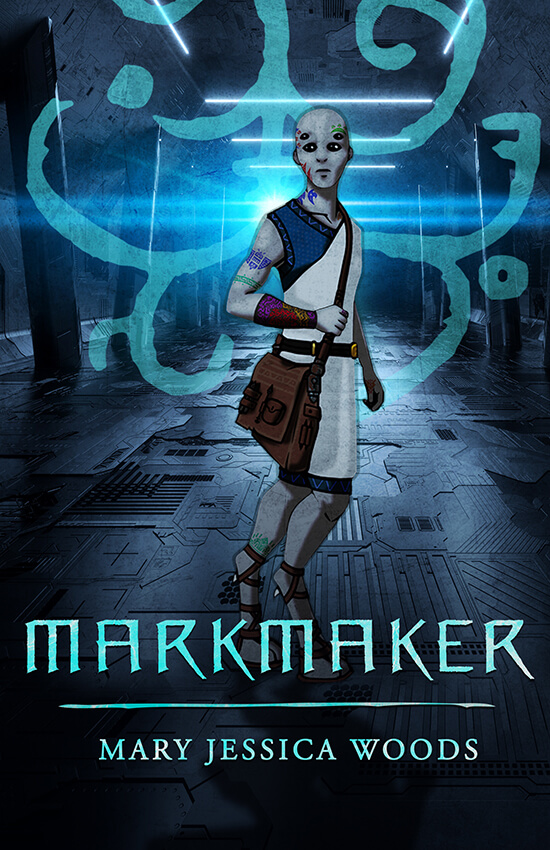 Mariikel is a member of the Noxxiin Aurorii (Children of the Stars), a nomadic humanoid alien species who have returned to their native planets after hundreds of years of exile. His people live on massive world ships, and they follow a religion based on a caste system and ancestor veneration. Their religious and legal rites are bound up in a complex tattoo culture. Every life event, birth, marriage, death, even each job promotion is not considered valid until it is inscribed in ink on the skin. The Noxxiin even believe that to die without a clan mark condemns one’s soul to death and oblivion rather than the welcoming heavenly embrace of their ancestors. Markmakers like Mariikel hold an honored position that is a mix of legal notary, revered artist and spiritual priest. The Markmaker’s highest value is encapsulated by the phrase upon their clan seal, “Truth in the Flesh”. Unfortunately, Mariikel is an oath breaker. If he is caught in his lies, he could be exiled or killed for his crimes, and yet after witnessing a grave injustice ratified by his own clan, he feels he has no other choice. His own conscience torments him, and mercy drives him to break all the taboos he was raised with.

Keeping his secret is getting harder and harder, though, as his clan begins to face constant pressure from a corrupt war faction. They argue that the occasional war crime is worth reclaiming their lost home planets, now inhabited by human colonies. As his nation is driven to the brink of civil war over a struggle to define truth, Mariikel finds himself wondering, “What even is truth?”

Given its non-human setting, it should not surprise anyone that the Catholicism in this book is decidedly a covert inspiration. Readers of any faith will recognize Mariikel’s moral conflicts as something parallel to their own, even though they are couched in the terms, taboos and maxims of an alien society. Catholics will especially relate to Mariikel’s burning desire for reconciliation and something like a confessional rite. The Noxxiin’s faith regarding their dead ancestors also echoes and rhymes with our Communion of Saints, without actually being a perfect comparison.

But that is in fact the beauty of science fiction. The purpose of examining an alien in fiction is to examine our own humanity by comparison. Likewise examining an alien’s spiritual life is useful for examining our own spirits. This is exactly why it is so beneficial to have authors inspired by their Catholic faith writing in every genre.

At the same time, readers looking for overt catechesis and Catholic themes won’t be satisfied by this book. Neither will those readers who prefer lots of action-packed fight scenes. But Woods has crafted a book with high personal stakes for her main character and lots of tension. As a story inspired by the Catholic imagination and accessible to readers of all worldviews, it is a welcome addition to the sci-fi genre. Be prepared to chew your fingernails as you follow Mariikel’s journey, and his species’ journey, as they wrestle with the nature of truth itself.

Truth, honor and loyalty are all at odds with one another, and the power of art lies at the center of it all. Such is the theme of Markmaker, a character-driven science fiction novel inspired by a tabletop roleplaying game that the author played with her college friends. This home-brewed RPG featured a sci-fi/fantasy universe greatly inspired by the world of the videogame, Destiny.

Yet despite these very nerdy origins, Woods’ story doesn’t feel like a Lit-RPG (that’s a subgenre of literature based on video and roleplaying games) or even the usual D&D inspired storyline. Its plot structure is more aptly labeled as a “Bildungsroman” which is a novel dealing with one’s formative years or spiritual development. Some famous examples include Jane Eyre and To Kill a Mockingbird.

Markmaker features war and discusses many moral problems of war, but because the story is told from the point of view of a member of the artist clan rather than a soldier I would not classify it as part of the “Space Marine” subgenre. Its characters are intensely relatable despite the fact that none of them are humans. Suffice to say, if you like complex societies, sociological sci-fi or fantasy, and morally-conflicted character-driven stories, you’ll find this to be exactly what you are looking for.

Surviving the Black Hole was only the first part, now Dex will have to survive the far future and reunite with Santiago.